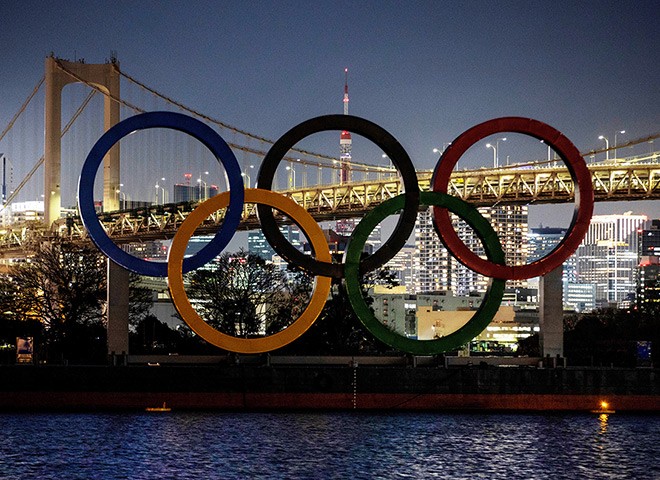 The illumination of five Olympic rings in Tokyo Bay is turned off at 8 p.m. each evening in accordance with a request from the metropolitan government for businesses to close at that hour due to the month-long state of emergency in the capital over the coronavirus pandemic that was declared from Jan. 7. (Hikaru Uchida)

Japanese athletes expecting to participate in the delayed 2020 Tokyo Olympic Games fear the sports extravaganza could end up exacerbating the novel coronavirus pandemic, posing an added risk to themselves as well as fans, an Asahi Shimbun poll shows.

They also expressed concern about a lack of support from fans at a time when the public is more preoccupied with staying safe than attending a massive event.

The survey was carried out as the nation grapples with a sharp surge in infections that has pushed the nationwide death toll from COVID-19 to over 5,000 this week.

The primary concern, voiced by 25 respondents, was that the summer Games could result in spreading the virus further.

This was followed by 18 worried about the risk of contracting the virus themselves. A lack of strong support from the public after the pandemic struck accounted for 15 replies.

Fourteen Olympians cited a lack of competitions and inadequate training opportunities to prepare for the Games. The same number worried that the Games, if they go ahead, would fall short of becoming an event where athletes are able to compete to become the world’s No. 1 due to an absence of numerous competitors.

Six respondents said they are not particularly concerned about the Games, according to the survey.

Respondents were allowed to choose more than one answer with regard to the question that concerns them most about the Games.

The online survey was conducted between November and January, covering 126 Olympians of 15 events, and on condition their names would be withheld when The Asahi Shimbun reported the findings.

Forty-one athletes expecting to participate in 11 events provided replies before Jan. 7, when the government declared a second state of emergency for the greater Tokyo area due to the spiraling pandemic.

The government maintains that the Olympics and Paralympics can go ahead this summer as rescheduled as long as due precautions are taken against infections.

In contrast, an overwhelming majority of the public are concerned about the wisdom of holding the event in light of a steep rise in cases and deaths in recent months, opinion polls by news media show.

The Asahi Shimbun survey found that many Olympians felt the government had failed to provide a sufficient explanation about its preparations toward hosting the Games.

This was the most common answer chosen by 19, when respondents were asked about what they felt was lacking most.

Asked to choose multiple answers about what they felt is indispensable for the Games to be held a year behind schedule, 22 cited spectators. The same number cited attendance of athletes from all member countries and territories of the International Olympic Committee. Both figures constituted the most common answer.

Sixteen Olympians referred to the Opening and Closing ceremonies of the Games. Six chose the Olympic Village for athletes while three, the least, mentioned the Olympic torch relay leading up to the Games.

The IOC said in March 2020, when it announced the postponement of the Tokyo Games, that only 57 percent of all events were filled, noting that the rest remained up in the air due to the global pandemic.

As for a cap on the number of spectators, 13 respondents picked the answer that half the capacity or only those who are relatives of or associated with Olympians should be allowed to attend. Eleven chose the option of not imposing a ceiling on spectator numbers.

Asked to write freely about their situation while the public health crisis rages, one respondent said restrictions on training made it an exacting task to get a sense of getting in better physical shape and maintaining motivation.

Another athlete cited the difficulty of securing funds for training as sponsor companies found their bottom lines heavily impacted by the pandemic.

But some Olympians tried to find a positive side to the rescheduled Games.

One said the year-long delay provided valuable time to address a weak point during the extended training period.

Another said the rescheduling provided renewed inspiration to do one's utmost under such a tough environment.