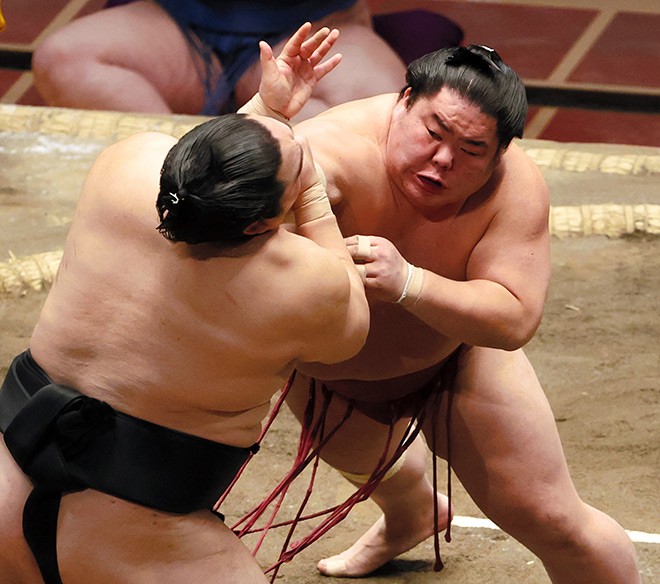 Rank-and-file Daieisho clinched his first career victory at the New Year Grand Sumo Tournament on Jan. 24 in a race marked by no-shows due to the COVID-19 pandemic and disappointing performances by high-ranked competitors.

Daieisho, maegashira No. 1, easily forced out Okinoumi, maegashira No. 5, on the last day of the 15-day tournament in Tokyo’s Ryogoku Kokugikan, finishing with a 13-2 record.

He became the first wrestler from Saitama Prefecture to win the Emperor’s Cup.

“I was surprised to find that the Emperor’s Cup is so heavy,” Daieisho said in an interview after the tourney to delight of his audience. “I am just so happy.”

Daieisho, 27, emerged as solo leader in the race on Jan. 23 after co-leader ozeki Shodai suffered a painful loss to sekiwake Terunofuji.

With one win ahead, Daieisho set his sights on clinching the championship with one more victory.

Daieisho defeated all seven wrestlers he faced in ranks higher than his.

The focus of attention before the opening of the tourney was whether ozeki Takakeisho could secure the promotion to yokozuna, sumo’s highest rank, by winning the championship. He seemed to be in a perfect position, having won his second career victory in November.

But Takakeisho was forced to pull out of the race due to ankle injuries on Day 10 after suffering seven defeats, a record so dismal that it shattered his hopes of becoming yokozuna.

Yokozuna Hakuho withdraw from the tournament after he was confirmed to be infected with the novel coronavirus five days before the opening of the tournament. Kakuryu, the other yokozuna, sat out the tournament because of a back injury.

It marked the third consecutive tournament that both yokozuna were absent from the contest, which will likely trigger renewed calls for them to retire from sumo if they cannot appear in the ring.

In all, 16 wrestlers in the top two divisions had to stay away from the tournament after their test results proved positive or had been exposed to others with the virus.