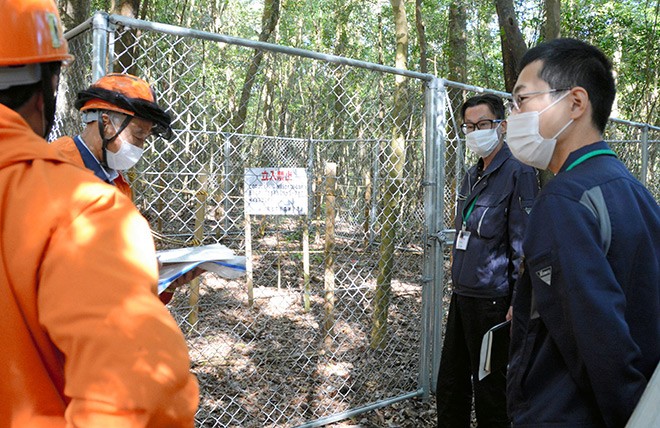 An estimated 26 tons of the herbicide 2, 4, 5-T, known to cause fetal deformities in mice, was buried in 1971 or after and is still sitting in mountains in 42 municipalities in 15 prefectures, according to the Forestry Agency.

The agency instructed regional forest offices when burying the herbicide to mix it with soil and cement to make concrete blocks, and to then bury the blocks more than a meter deep as far from water sources as possible.

But an estimated 18 tons of the herbicide in 20 municipalities in 12 prefectures were not buried in accordance with the agency's instructions.

“It was done in an extremely sloppy manner,” said Kenji Sakata, a professor emeritus of concrete technology at Okayama University.

“You can’t even call it concrete because soil was used instead of gravel. The condition is also poor in the soil, and those blocks may have already crumbled.”

The Forestry Agency insists that the herbicides pose no threat to human health. However, authorities in Iwate Prefecture, Fukuoka city and elsewhere are asking it to remove the toxic materials as they fear that the herbicides could be uncovered by torrential rain or landslides, which have occurred more frequently in Japan in recent years.

“We decided to bury it because it could be used mistakenly,” said Takahisa Tsukamoto, 85, who was in charge of the burial in 1971 and later took the position of director-general of Forestry Agency, said of the herbicide.

“We talked to the health and other ministries at that time and tried our best in terms of its safety, but we did not consider fully the risks of torrential rain and earthquakes.”

The Forestry Agency used 2, 4, 5-T when they planted trees in state-owned forests, but stopped doing so in 1971 after research found the fetal deformities in mice.

The agency said it then returned about 60 percent of the herbicide to manufacturers, but buried the remaining amount in state forests in 50 municipalities in 17 prefectures as it couldn't come up with an alternative disposal method.

Forest offices in Ehime Prefecture were among those that failed to follow the Forestry Agency's instructions to bury the waste in concrete blocks, research by Ehime University and other entities has found.

Similar cases have been identified in other areas, some of which have acted to remove a portion of the herbicide they buried.

In numerous cases, regional forest offices buried the herbicide in their own manner prior to being notified how to do so by the Forestry Agency.

The issue of how the herbicide was buried has garnered large public attention previously, at one point being addressed in the Diet.

Though a number of municipalities are now requesting that the buried herbicide be removed, the Forestry Agency said digging it up could also risk releasing it into the atmosphere.

"We don't have an established method yet to detoxify it safely, and there are concerns that it could spread if it's uncovered,” the agency said.

“The lives of local people are not affected by the herbicide,” a Forestry Agency expert committee said.

The spots where the herbicide was buried have been inspected twice a year visually, and they have also been checked after heavy rain or earthquakes.

Despite this, some municipalities are still requesting the herbicide be removed, citing the threat posed by rainfall as an imminent risk to residents' safety.