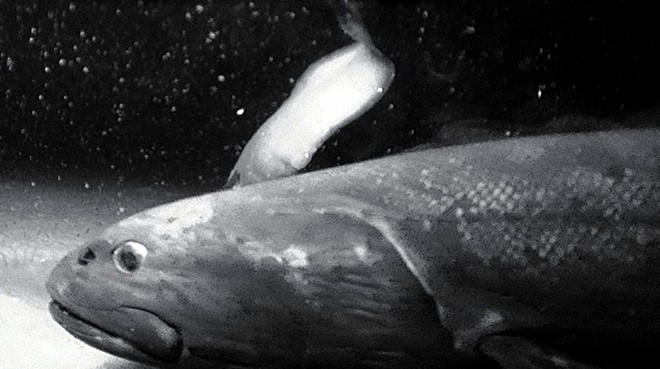 Researchers have discovered a deep-sea fish species that's so huge in waters off Shizuoka Prefecture that they named it after the highest rank for sumo wrestlers, the yokozuna.

A team of researchers from the Japan Agency for Marine-Earth Science and Technology (JAMSTEC) and other institutions found four unknown fish at a depth of more than 2,000 meters in Suruga Bay off the prefecture.

The fish were extremely huge with one measuring 1.4 meters long and weighing 25 kilograms, making them the biggest among more than 90 species of slickheads, also known as “sekitori iwashi” (sekitori sardines). "Sekitori" refers to sumo wrestlers in the sport's top two divisions.

The new species was given the Japanese name of “yokozuna iwashi” since it is considered at the top of the bay's deep-sea ecosystem.

The finding by researchers including principal researcher Yoshihiro Fujiwara and research technician Masaru Kawato at JAMSTEC’s Marine Biodiversity and Environmental Assessment Research Center was published in the British journal Scientific Reports on Jan. 25.

“We learned for the first time that an ecosystem formed with yokozuna iwashi at its top exists at a depth of more than 2,000 meters in Suruga Bay,” Fujiwara said. “I’m amazed at how such a giant fish remained undiscovered in the waters, where research is frequently conducted."

The team boarded the Shonan Maru, a training vessel for the Kanagawa Prefectural Marine Science Senior High School, in 2016 to conduct research into the deep waters of the bay using longlines, a type of heavy fishing line.

Because of their lack of scales on their heads, the fish were deemed to belong to the family of slickheads, which is completely unrelated to species of edible fish, such as Japanese pilchard or Japanese anchovy.

The team concluded that the fish were a new species since they are not genetically identical to their related species, either. The species’ scientific name, Narcetes shonanmaruae, is derived from the Shonan Maru.

Species of the slickhead family feed mainly on jellyfish and other gelatinous plankton. But partly digested fish were discovered in the stomachs of yokozuna iwashi. The new species also has tiny sharp teeth that are ideal for catching other fish.

The team concluded that the yokozuna iwashi is a predator that lives chiefly by chomping down other fish and ranks at the top of the food chain based on an analysis on nitrogen contained in amino acids in its body.