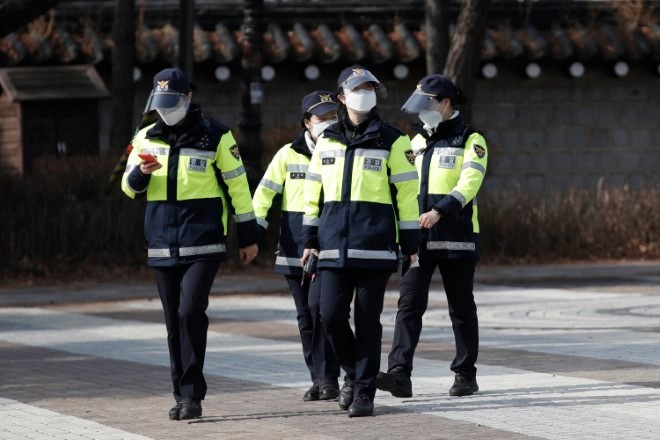 South Korean police officers wearing face masks as a precaution against the coronavirus walk in Seoul on Jan. 25. (AP Photo)

SEOUL--South Korean authorities were scrambling on Wednesday to contain coronavirus outbreaks centered around Christian schools as the country reported a jump in infections, dampening hopes of a speedy exit from a third wave of the pandemic.

A total of 297 COVID-19 cases had been traced to six churches and mission schools run by a Christian organization, senior health official Yoon Tae-ho told a briefing.

More than 100 cases were confirmed overnight among people linked to a church and its mission school in Gwangju, about 270 kilometers south of Seoul, officials said. Another 171 cases had been linked to an affiliated school in the city of Daejeon since Jan. 17.

The Korea Disease Control and Prevention Agency (KDCA) said the Daejeon mission school outbreak appeared to have been spreading for some time before it was detected.

The Christian organization responsible for the facilities, International Mission, was ordered to test everyone linked to 32 of its 40 schools and churches around the country.

The group apologized for not taking early measures to prevent the outbreak. It said that while some infected students may have been asymptomatic it had also failed to require students with cold-like symptoms to get tested.

“We deeply apologize for not responding earlier and for thinking the students could have had a cold when a student first developed fever,” it said in a statement.

The organization said it would submit a full list of students and staff in its schools nationwide.

Prime Minister Chung Sye-kyun called on people affiliated with the affected facilities to get tested.

“The key is speed. I call on the authorities and local governments to make all-out efforts to identify related facilities and prevent further transmission,” Chung told a government briefing.

South Korea had managed to keep the virus under control thanks to aggressive testing and contact-tracing, but a third wave that broke out late last year has proven more difficult to contain.

The KDCA has said 45.4 percent of infections in the country over the past year were caused by cluster infections emerging from specific close-knit groups. Religious facilities were the main source of such clusters.