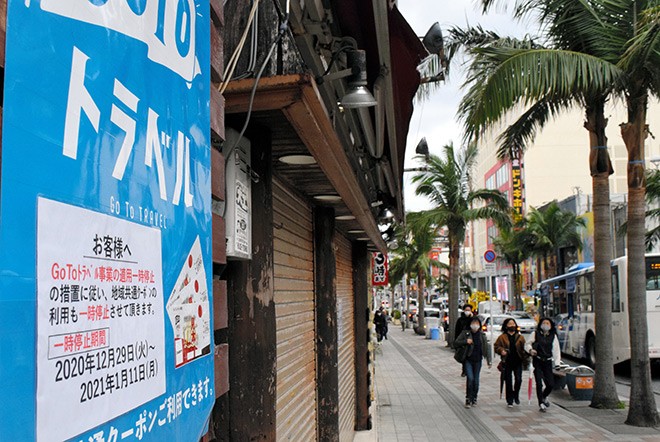 Tourists are scarce on a famed shopping street in Naha on Jan. 9 while many shops are temporarily closed. (Mika Kuniyoshi)

NAHA--Okinawa Prefecture's economy, heavily reliant on tourism, took a major blow in 2020 amid the novel coronavirus pandemic with a record drop of 63.2 percent in domestic and foreign visitors.

The number visiting Okinawa in 2020 was about 3.73 million, compared to 2019 when the prefecture welcomed more than 10 million tourists, the prefectural government reported on Jan. 26.

That marked the highest decline since Okinawa's reversion to Japan in 1972.

The tourism industry has been buffeted by people refraining from traveling during the COVID-19 pandemic. Okinawa prefectural officials don't see the situation improving any time soon.

“We are in a very difficult situation,” said Kazuhiro Toguchi, director of the Okinawa Prefectural Department of Culture, Tourism and Sports. “We expect to continue to be greatly affected by the infection situation and the status of the Go To Travel program.”

According to the Jan. 26 announcement by the prefectural government, it was the first time that the number of tourists decreased year on year since 2011 when the Great East Japan Earthquake and tsunami occurred.

In 2019, Okinawa Prefecture recorded more than 10 million tourists for the first time. But in April and May 2020 when the state of emergency was issued by the central and local government, the number of tourists fell more than 90 percent year on year.