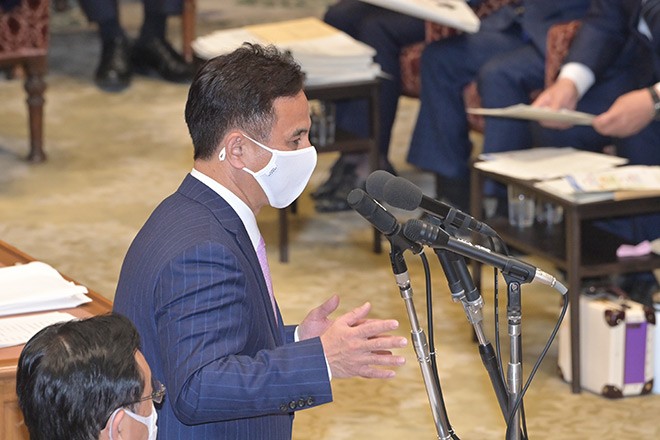 The government has begged citizens to avoid going out to such spots to get the COVID-19 pandemic under control and urged businesses to close early.

“I’m sorry about what happened while we are asking the public (to exercise self-restraint),” said Prime Minister Yoshihide Suga, commenting on the members’ behavior at an Upper House Budget Committee meeting on Jan. 27.

“They should have acted in a way that can win the understanding of the public. We will handle the matter properly.”

Bunshun Online reported on Jan. 26 that Kiyohiko Toyama, a former vice finance minister and a Lower House member of the junior ruling coalition partner, Komeito, went to a club in the Ginza district with an acquaintance on the evening of Jan. 22.

“I deeply regret (what I did) from the bottom of my heart,” Toyama told reporters.

The online news site Daily Shincho also reported on Jan. 26 that Jun Matsumoto, acting chairman of the ruling Liberal Democratic Party’s Diet Affairs Committee, visited clubs in Ginza and another establishment on the evening of Jan. 18.

Matsumoto said he went to the clubs to hear requests from operators after they had closed for the day.

“I regret my thoughtless behavior,” he said. “I’m truly sorry (for what I did).”

The two members were not alone in defying restrictions imposed by the authorities to contain the spread of the novel coronavirus.

Stablemaster Tokitsukaze went to a mah-jongg parlor during the New Year Grand Sumo Tournament, which ended on Jan. 24, in violation of the Japan Sumo Association’s guidelines to prevent infections, sources said on Jan. 27.

The guidelines prohibit JSA members from going out unless absolutely necessary, in principle. The JSA will consider taking disciplinary action against him.

Tokitsukaze, 47, a former makuuchi division wrestler known as Tokitsuumi, also visited Miyagi Prefecture on a private trip and participated in a golf competition last autumn despite the ban on nonessential outings.

In response to his actions, the JSA demoted his council member status to the lowest rank “toshiyori” after the Autumn Grand Sumo Tournament. A demotion is the third most severe punishment the JSA can impose, after punitive dismissal and a recommendation to retire.