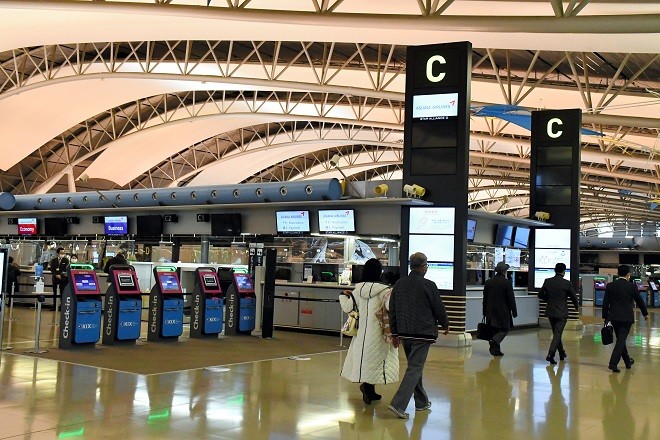 IZUMISANO, Osaka Prefecture--A record-low 6.55 million passengers passed through the gates at Kansai International Airport here in 2020, a year-on-year plunge of 79 percent caused by the COVID-19 pandemic.

That total fell short even of the figure for domestic-only Itami Airport also in Osaka Prefecture, Kansai Airports, the operator of the two airports, said on Jan. 25.

Kansai International Airport, which opened in September 1994, saw a steady stream of cancellations of international flights after travel restrictions were introduced in February last year.

The number of international passengers at the airport in 2020 decreased by 86 percent year-on-year to 3.5 million, including 2.15 million non-Japanese flyers, while domestic passengers declined by 56 percent to 3.05 million after leisure and business travel demand dropped over infection concerns.

Itami Airport reported a 54-percent decrease to 7.67 million, while Kobe Airport, also managed by Kansai Airports, posted a 52-percent fall to 1.63 million, its lowest total since opening in February 2006.

The combined passenger traffic at the three airports was 15.85 million, down by 69 percent.

The number of LCCs using Kansai International Airport has sharply increased since the mid-2010s when visa requirements were eased for Chinese and Southeast Asian tourists.

That rise helped to push passenger numbers to five straight annual record highs until 2019, when the total hit 31.91 million, 2.4 times more than the number for 2009.

Kansai International Airport offered 1,409 international round trip flights weekly during the peak winter period in January 2020. By the end of the year, such flights had decreased to around 50 a week.

Airlines based at Kansai International Airport are bracing for continuing tough times this year.

Peach Aviation Ltd. will reduce its domestic flights in February to 48 percent of its initial plan, while Jetstar Japan Co. plans to abolish services on three routes to and from Fukuoka, Kochi and Kumamoto by the end of March.

Kansai Airports is also expected to lose money with so few inbound tourists using the duty-free shops and restaurants at the airports.

Kansai International and Itami airports became the first privatized airports in Japan in April 2016. Others followed suit around the country.

Like Kansai International Airport, many privatized airports attracted LCCs to cash in on the soaring number of inbound tourists.

The pandemic destroyed that business strategy.

Takamatsu Airport, which was privatized in 2018, saw 288,000 passengers--all domestic travelers--between April and December last year, down by 79 percent from the same period the previous year.

The airport operator also canceled plans to extend the passenger terminal building to expand international services. Construction was originally scheduled to begin in the business year starting in April 2020.

“We decided to revise (the project), including its content, because prospects remain uncertain,” said an official of the airport operator, whose shareholders include Mitsubishi Estate Co.

Fukuoka Airport, whose operation has been taken over by a consortium comprising Nishi-Nippon Railroad Co., Kyushu Electric Power Co. and other companies, reported a year-on-year drop of 99 percent in international passenger traffic to 3,000 between April and September last year.

The consortium is required to pay about 14 billion yen ($133.42 million) to the central government every year in exchange for the right to operate the airport.

But after posting an operating loss of 7.8 billion yen, the consortium was unable to pay the fee for the business years ending in March 2021 and March 2022.

Hiroshima Airport was expected to be privatized in April this year, but the schedule was delayed until July.

Passenger traffic at the airport was 589,000 between April and December 2020, a 76-percent drop from the same period in 2019. The airport operator is now unsure if it can implement its plans to significantly expand international services.

“All privatized airports face financial difficulties because their strategies to increase inbound tourists backfired while domestic travel decreased,” said Kazusei Kato, a Keio University professor specializing in transport economics. “Inbound tourists will return some day as long as economic growth continues in Asian countries. It is important to envision the time after the coronavirus pandemic and make preparations, such as speeding up the immigration process.”