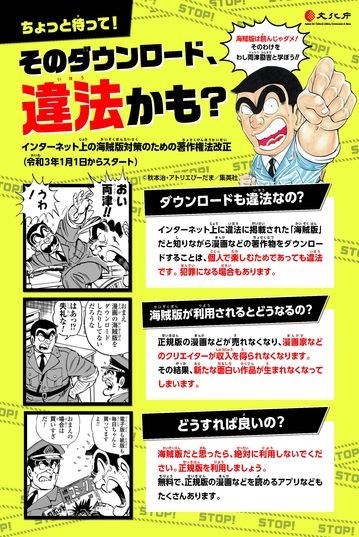 Manga fans stuck in stay-at-home lifestyles under the COVID-19 pandemic may be partially to blame for a recent surge in access to piracy websites, which show manga and other content without permission.

The top 10 piracy websites that were viewed the most often had about 200 million hits from Japan in the single month of December alone, resulting in an estimated loss of more than 41.4 billion yen ($394 million) due to content read without paying.

The figures, according to a study by a group that organizes publishing houses and other companies, are up sharply from the estimated 72 million hits and 3.9 billion yen in losses in January last year. Officials of the group also pointed out that some new piracy websites are growing in popularity.

ABJ officials said that loss from piracy websites remained relatively subdued roughly between spring 2018 and spring 2019, but the number of hits on several websites began rising sharply sometime around autumn 2019.

The publishing industry is racking its brains over how to confront the piracy websites, some of which hop from one server to another to make the website operator less traceable. Others refuse to comply with requests for the deletion of copyrighted works.

“The longer hours spent at home under the coronavirus pandemic may have played a role,” said an ABJ official. “We are left deeply shocked, because the publishing industry has been calling on the public not to turn to pirated editions.”

The government has been working to step up measures against pirated editions, including by having revisions to the Copyright Law enacted last June.

Starting in January this year, it is illegal to download online content, such as manga, photos and research articles, if the downloader knows it was posted illegally without permission from the copyright holder, even if the download is intended for private use. Exceptions are made for certain cases, such as unintended inclusion in screenshots.

Similar downloads are criminally punishable if they are found malicious in nature.

Operators of so-called “leech” websites, which provide links to piracy websites, and those who engage in similar acts became criminally punishable in October last year.