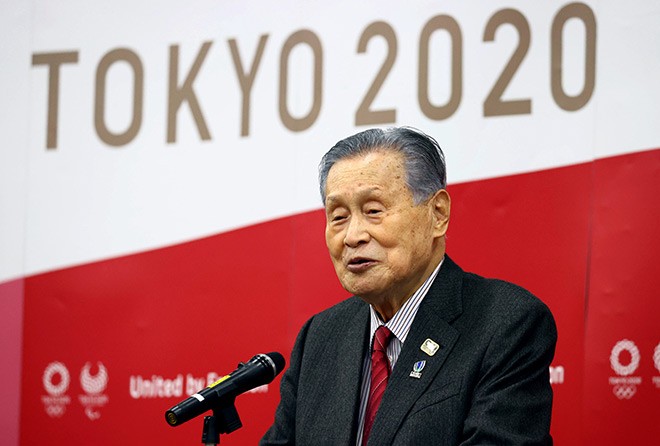 Yoshiro Mori, president of the Tokyo Organizing Committee of the Olympic and Paralympic Games, speaks at a ceremony in Tokyo on Jan. 12. (Pool)

Yoshiro Mori, chief of the Tokyo Olympics organizing committee, has come under fire for saying that “competitive” women prolong meetings with their need to talk.

Mori made the remarks Feb. 3 at an extraordinary meeting of the Japan Olympic Committee Council. He was giving his “private opinion” about the JOC’s policy to increase female members of sports organizations’ executive boards to 40 percent or more.

“Women are competitive,” he continued. “When someone raises his or her hand and speaks, they probably think they should speak, too. That is why they all end up making comments.”

Mori also quoted an anonymous person as saying it may be necessary to put a cap on how long members can speak.

“I was told that if the JOC plans to increase female members of the executive boards, meetings will be drawn out unless the time allotted for each speaker is limited to some extent,” he said. “I will not say who said so.”

He also referred to the Tokyo Organizing Committee of the Olympic and Paralympic Games, of which he is president.

“The organizing committee includes about seven women, but they all know how to behave,” he said.

Mori is expected to apologize for his remarks at a news conference on Feb. 4, sources said.

Mori has a long history of making insensitive and offensive remarks, including during his tenure as one of Japan’s most unpopular postwar prime ministers.