Airlines working on the ground to lift struggling rural areas 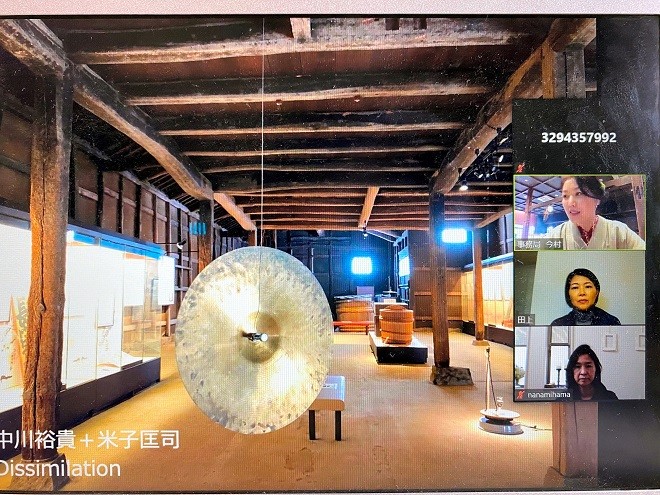 In January this year, the small, scenic town of Yakage, Okayama Prefecture, was decked out with modern art pieces at its historic buildings and along its streets.

Special nighttime programs ran for nearly two weeks for an art festival titled “Workation Resort Bitchu Yakage” in the rural community, once the home of a post station along the Sanyo Road in the Edo Period (1603-1867).

The hope was that it would lure in visitors to the town for overnight stays. But this art festival, held during the pandemic, was not at all like a normal local event or tourism campaign.

The idea was to have tourists come and telework from there in the day and then enjoy themselves--safely--afterward.

A lot of precautions and programming changes were made due to the ongoing health scare. The 10-day event was capped on Jan. 17 with a reading by a dramatist streamed online.

The Japan Tourism Agency had initially suggested Bitchu Yakage consider promoting itself as a destination for people to work remotely from while vacationing--a “workation.” It commissioned Yakage DMO, the town’s tourism organization, to come up with programs to bring in overnight tourists.

The event was notably designed with the help of a major airline, a trend that has developed over the years in rural revitalization efforts.

The ANA Strategic Research Institute Co. think tank conducted research and provided advice to the town to help refine proposals for the art event and its promotion.

“We weighed different approaches that would highlight town attractions by using art,” said an ANA Strategic Research Institute official who helped design the festival. “I believe we succeeded in promoting them widely in urban areas and elsewhere."

The think tank was created in 2004 by All Nippon Airways Co. (ANA) as a survey center that was later re-established into an independent corporation in 2006.

Half of its 100 employees belong to the Japan creation department, which carries out research and promotional work regarding local revitalization and tourism. It sends workers to 17 municipalities and other organizations to help with public relations and other similar projects.

Takehiro Sato, 48, the secretary-general of Yakage DMO, said collaborating with the research group on the event was a positive experience.

“We could leverage the large company’s abundant data, imagination and expertise, and we learned many lessons,” Sato said. “I expect it (ANA) will continue cooperating with regional bases to encourage local communities.”

After the boom in teleworking took off last year, the research center began to put more effort toward promoting workations, encouraging people to work remotely from a travel destination.

Pulling out a laptop at the beach, or working from a quaint and peaceful town with a view of Mount Fuji, are the kind of offerings that might make up a viable sightseeing strategy amid the ongoing health scare.

Major air carriers are all struggling in the face of a prolonged period of industry turbulence because travel demand has bottomed out amid the pandemic.

But despite the tough situation, they are taking the long view and continuing to pour resources into helping local communities’ economic revitalization efforts lift off, and chart a path to safer skies for when the crisis is finally over.

ANA is not alone in helping and honing local talent.

In fall 2018, Katsuhiro Yasuda, 58, then the manager of Japan Airlines Co.’s (JAL) Tohoku local revitalization department in Sendai, was talking with a municipal official about their next big project.

He was passionate about some new ideas that could help broaden the appeal of the luscious red strawberries grown locally in Higashi-Matsushima, Miyagi Prefecture.

The pair landed on a project involving Fruitsling sparkling liquor made from locally produced strawberries and “yuzu” citrus fruit from nearby Iwate Prefecture. The drink has proven to be popular among women.

Their project was launched in December last year, and Fruitsling is now being sold through JAL’s shopping site. The site allows local producers to expand their reach and sell to other places by leveraging the airline’s size and reach.

“Many companies have provided support, and JAL helped us to release the specialty commercially under a brand name,” said a city official involved in the project. “I appreciate that.”

JAL launched its “new Japan project” in 2015 to enable this kind of regional promotion that focuses on local specialties and tourism resources. The Tohoku department was working mainly in areas heavily affected by the 2011 Great East Japan Earthquake and tsunami.

“Entities in local areas are always important partners for us,” Yasuda said. “At the time of the earthquake disaster, we were struggling with the reconstruction of our company. We would like to return the favor through our contributions here, even though it might be a bit late.”

Picking the right people for the job is also key to the success of these kinds of projects.

Chiaki Kobayashi, 55, worked as a cabin attendant and in other roles related to passenger services over the three decades since she joined JAL. In 2016, she was assigned to the Tohoku department.

After three years there, she became enamored with regional promotion as a way to help revive local communities. Kobayashi is now a manager of the business strategy section of the local business department there, set up just last fall.

Kobayashi was at one point assigned to the external Tohoku Tourism Promotion Organization to supervise the Phoenix School training program, aimed at young people in the local tourism industry.

She organized seminars and workshops for ryokan operators, local government officials in charge of tourism and others with the hopes it would help incubate tourism specialists there. Looking back on her work there, she was humble.

“It was all new to me,” Kobayashi said. “I shed tears many times about my inadequacy.”

But the school proved to be very popular. Kobayashi made effective use of her skills in communication and problem-solving she developed through her career as a flight attendant.

Kobayashi said aircraft crew members are trained to adjust their responses to what the situation calls for, something that helped her in the school project.

“I could closely work with municipalities, businesses and residents in a local area,” Kobayashi said. “The experience drastically changed my view of life.”

And she left an impression.

“She skillfully made arrangements for people from various regions and industries, and her adeptness at bridge-building allowed for deeper discussions,” one student said about Kobayashi. “I was also impressed by how she flexibly responded to unexpected situations on many occasions.”

The program was initially going to end when Kobayashi’s three-year assignment was up, but it was extended after proving so popular.