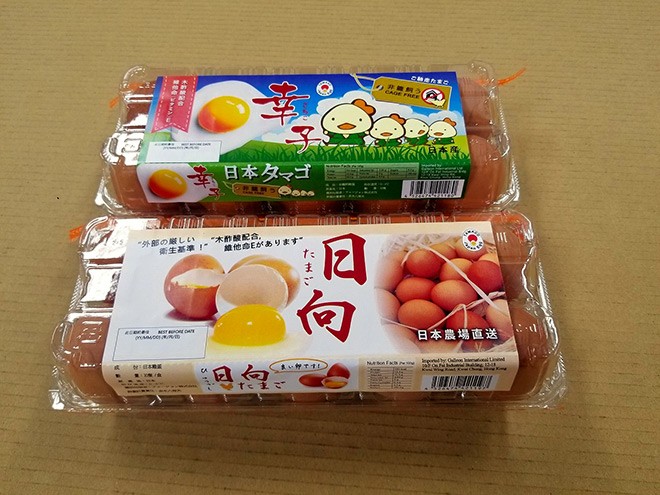 Exports of farm produce and food products inched up to their highest level yet in 2020, increasing by 1.1 percent over the previous year to total 922.3 billion yen ($8.8 billion).

It was the eighth straight year to register record gains although the latest figure fell short of a near-term farm ministry goal of 1 trillion yen in such exports.

The latest increase announced Feb. 5 was due to greater demand among households in foreign markets even as restaurants overseas cut back on purchases due to the novel coronavirus pandemic.

Egg exports, mainly to Hong Kong, constituted a major growth item by registering a 107.4 percent increase over 2019. Officials cited the practice in Japan of pouring a raw egg flavored with soy sauce over a bowl of steaming rice, noting that it was probably adopted by foreign tourists.

Exports of powdered milk also increased by about 20 percent, mainly to Vietnam.

Exports of items that can be prepared quickly at home, such as instant noodles, corn flakes and packages of cooked rice, also increased by between 20 and 40 percent.

Fresh tuna used for canning abroad increased by about 30 percent, but overall seafood exports decreased by 20.8 percent to 227.67 billion yen.

The temporary closing of restaurants across Europe and North America due to the COVID-19 crisis led to a sharp decrease in exports of scallops and yellowtail, among other seafood items.

Exports of beef and sake also struggled in the first half of 2020, but improved in the second half on the back of efforts by retail outlets to increase sales through online promotions as well as offers of products for household consumption, such as sliced beef.

As in 2019, the three leading destinations for food and produce exports were Hong Kong, China and the United States. Those three nations, along with Taiwan and Vietnam, rounded out the top five destinations and accounted for about 70 percent of the exports.

South Korea fell to sixth place, due mainly to a boycott of Japanese beer in retaliation for stricter import restrictions placed on South Korean products from the latter half of 2019. The tighter restrictions were implemented following South Korean court rulings ordering Japanese companies to pay compensation to former wartime laborers from the Korean Peninsula.

The government has set a target of 2 trillion yen in produce and food exports by 2025 and 5 trillion yen by 2030.

The farm ministry is now focusing on creating farming and ranching regions devoted to exports of produce that still have room for growth in various parts of the world.