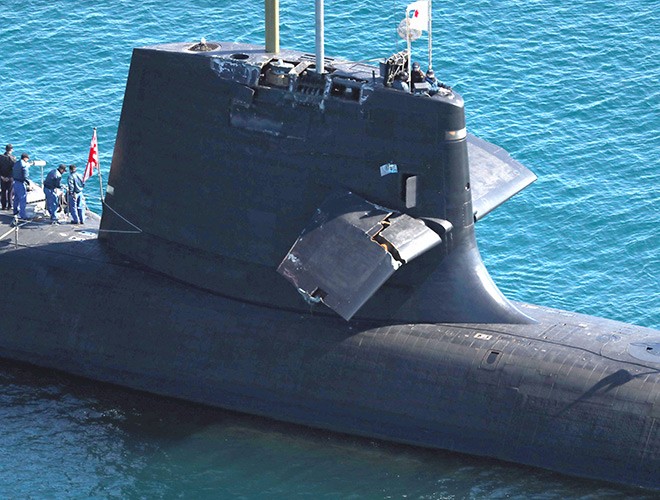 A surfacing Maritime Self-Defense Force submarine slammed into a foreign cargo ship on Feb. 8 while on a training exercise in waters south of Kochi Prefecture.

Three crew members aboard the MSDF Soryu submarine suffered minor injuries and no injuries were reported aboard the other vessel, the Hong Kong-registered Ocean Artemis.

The Japan Coast Guard will investigate the possibility of professional negligence on the part of submarine crew members, sources said.

A high-ranking MSDF officer said the accident should not have occurred and speculated that the crew member handling the submarine's sonar may have been negligent.

The Coast Guard on Feb. 9 began an investigation into the collision. The accident also damaged the submarine's communications equipment.

Coast Guard officials contacted the crew of the Ocean Artemis and were told no one felt the collision and that there was likely no damage to the ship, Chief Cabinet Secretary Katsunobu Kato said at a news conference on Feb. 8.

A Coast Guard cutter at around 7 a.m. on Feb. 9 carried about 40 investigators to the Soryu, situated about two kilometers from Kochi Port.

Defense Minister Nobuo Kishi apologized for the collision at a Feb. 9 news conference and said that an investigative committee on the accident had also been set up within the Maritime Staff Office.

The accident occurred in waters about 50 km southeast of Cape Ashizuri in Tosashimizu, Kochi Prefecture, on Shikoku island, according to Maritime Staff Office officials.

The Soryu was on a training exercise with about 65 crew members and had risen to a level where the periscope was above water. Though it spotted the cargo ship, it was too late to avoid a collision.

The submarine is 84 meters long, 9.1 meters wide and 10.3 meters high, according to the MSDF's website. It can reach a speed of about 20 knots.

Its periscope and antenna were damaged in the accident, but the Soryu was able to sail on and followed Coast Guard instructions to arrive off the coast of Kochi Port.

The Ocean Artemis left a port in Qingdao, China, on Feb. 5 and was carrying iron ore to Mizushima Port in Kurashiki, Okayama Prefecture, in western Japan, according to a website that provides location information about ships.

On Feb. 7, the cargo ship sailed south of the coast of Kagoshima Prefecture on the main southern island of Kyushu and was heading in a northeast direction off Kochi.

It was heading north in the Kii Channel as of Feb. 9.