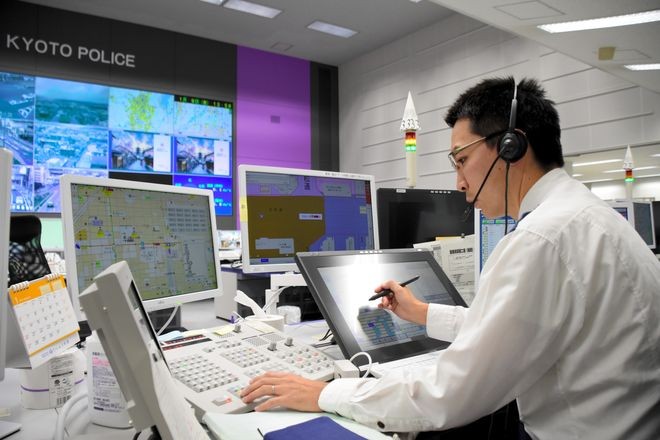 The National Police Agency plans to upgrade the emergency call system to allow police to see videos of crimes and accidents taken on the callers’ smartphones.

Such images would help police reduce their response times and more easily track down suspects.

Although privacy concerns must first be addressed, the NPA plans to have the new system operating nationwide by the end of fiscal 2021.

Hyogo prefectural police got a jump on using the system. In September, they adopted Live 110, which was developed by geographical information software system maker Dawn Corp. in Kobe’s Chuo Ward.

Under the system, people making 110 emergency calls may be asked to take images at the sites if possible.

The recorded videos are played in real time on a display at the surveillance control center to determine the gravity of the incidents and whether officers should be dispatched.

The mechanism was used in 22 instances in the five months through January, including reports of “a man with a sickle walking about,” a suspected “smuggler,” and “a car crashing into a utility pole, causing it to nearly collapse,” police said.

In December, a man using the 110 service told Hyogo police that he returned home and found “a strange man sleeping in my room” at an apartment complex in the Hanshin area around Osaka and Kobe.

The man used his smartphone to record the stranger leaving the home. An official of the police headquarters’ surveillance control center sent a link via a short messaging service to the man’s phone.

The video sent back by the caller through the link was displayed on a monitor at the center, which then shared still images from the footage with a local police station.

Several dozen minutes after the first report, officers from the police station found the stranger based on his clothing and body features.

He explained he “simply mistook” the victim’s home for his own, and he was reportedly released with a strict warning.

However, in three other cases using the Live 110 system, Hyogo police made arrests after the footage showed license plates and other details of the suspects.

An NPA white paper showed that police nationwide needed an average of eight minutes and nine seconds to arrive at the scene after an emergency call in 2019.

“An accurate assessment of the situation can be made only after police officers arrive at the sites,” a senior Hyogo prefectural police official said. “Officers begin to consider how to investigate the cases and start to preserve the scenes following that, so there is a time lag between the acceptance of the reports and the actual investigations.”

Witnesses to sudden crimes, accidents and fires often have difficulty accurately explaining what happened. Hyogo prefectural police said they can open investigations earlier when videos of the scenes are offered.

The images can lead to quicker identification of suspects, especially in rural areas that have fewer security cameras than in urban zones. Knowing the suspect’s clothes and movements can also accelerate the response in emergencies.

One challenge is managing the system in a way that protects the privacy of others recorded by the smartphones.

Kobe’s fire department started using a similar framework in November 2019, and deletes the videos within 24 hours.

Hyogo police retain the images from witnesses for one year.

But he said rules on the need to shoot videos and the storage periods should be set beforehand.

“Shooting videos for noninvestigation objectives or preserving footage for too long periods without a specific reason may lead to violations of privacy,” Miyashita said. “Informants might mistakenly or intentionally send unrelated videos.”