Cow excrement tapped by town in Hokkaido for CO2-free power 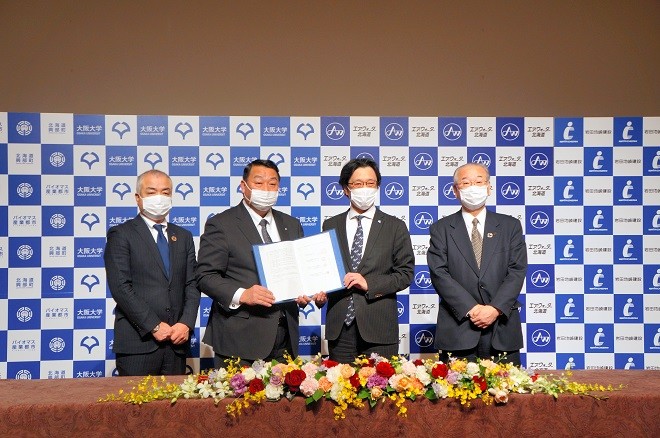 SAPPORO--The feces and urine of thousands of Hokkaido dairy cows may soon power facilities prefecture-wide with a world-first technology invented in Japan that converts them into environmentally friendly liquid biofuel.

Okubo on Feb. 9 signed an agreement with Kazutoshi Hazama, the mayor of Okoppe, Hokkaido, and other parties to set up a test plant in Okoppe within two years as a new business.

Major industrial gas supplier Air Water Hokkaido Inc. and contractor Iwata Chizaki Inc., both in Sapporo, are also partnering with Okoppe and the university to establish the plant in the town located along the Sea of Okhotsk.

Turning all bodily waste from 10,000 milk cows in the municipality into methanol could cover power consumed at all the town’s public facilities and seafood product processing plants and at two-thirds of its dairy factories, according to one estimate.

That's not all. Though Japan now imports all its methanol, according to Okubo, 20 percent could be replaced if excrement from all milk cows nationwide were converted into biofuel.

The trial facility is to be upgraded by fiscal 2024 at the earliest for commercialization. The business is looking to expand to other areas in and outside Hokkaido in fiscal 2030 or later.

As Hokkaido is home to many dairy farmers, the program is expected to spread to other areas in Japan's northernmost prefecture in the future.

“Dairy farming is dramatically increasing in scale, but there's a problem over how to deal with generated excrement,” Hazama said. “I hope the research will be accelerated to take an important role not only in the town but in Hokkaido’s development and Japan’s industries.”

Okoppe town signed up with Osaka University in 2019 to carry out joint research. Air Water Hokkaido and Iwata Chizaki joined the program as a step toward commercializing the method, harnessing the power of Hokkaido entities.

Under Okubo's technique, methane in biogas is dissolved in a special fluid before being exposed to ultraviolet rays, so that it will change into methanol and formic acid. The process can be completed at normal temperatures and pressures without emitting CO2.

“It enables us to use up all the materials with no waste,” Okubo said.

Okoppe now uses excrement to produce electricity with biogas, but after the end of the government’s feed-in tariff system for clean energy it will face the challenge of how to make effective use of the gas.

The town's latest project aims to convert biogas into liquid methanol and formic acid for easier storage and contribute to the realization of a more carbon-free community.

Methanol will be used to substitute for heavy oil to provide fuel to manufacturing plants. The substance will also be offered to allow fuel cells to generate and supply power to public facilities and elsewhere.

A plan is also being considered to replace official gas-powered vehicles and trucks that transport raw milk with electric ones.

Formic acid can allegedly be used not only as an additive for cattle feed, but also a material for the production of hydrogen, which is highly anticipated as a next-generation power source.

If methanol can be mass-produced at a lower cost, the project members will weigh selling the chemical to third parties making synthetic fibers, paints, agrochemicals and various other products.