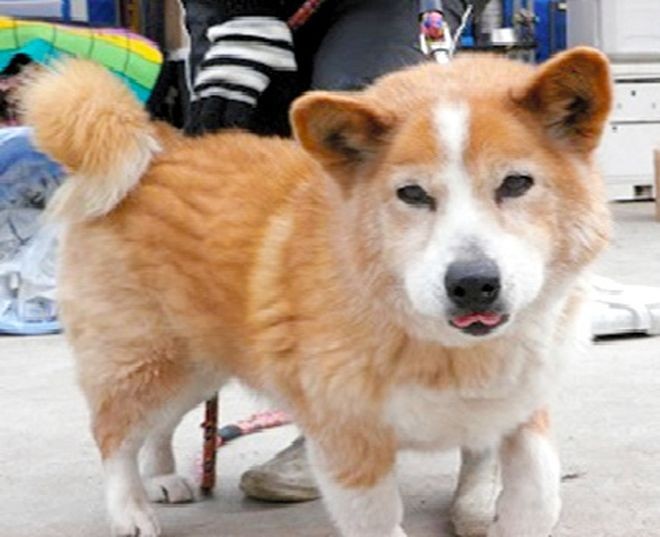 A dog named Rose, who was gentle and lived at her own pace (Provided by Koji Fujimoto)

When Koji Fujimoto first saw Rose, the canine seemed despondent and barely moved as she lay on the floor at an animal shelter in Takashima, Shiga Prefecture, in April 2014.

The mongrel, estimated to be 5 or 6 years old, was found near JR Futaba Station in Fukushima Prefecture in spring 2011 immediately after the Great East Japan Earthquake and tsunami triggered the crisis at the Fukushima No. 1 nuclear power plant.

Fujimoto, 61, a company employee in Toyama, and his wife, Michiyo, 61, visited the shelter of an animal protection group in Takashima in April 2014.

He quickly made up his mind to adopt the dog and finished procedures at the site to take ownership.

“I thought warmth would be necessary for the most depressed one,” said Fujimoto.

Rose had brown fur and measured 70 centimeters long. She was seemingly separated from her master due to the accident at the nuclear plant and never was reunited with her former owner before she died in 2017.

The Fujimotos went to Rose’s hometown of Futaba last autumn with her ashes. Though Rose’s original master has yet to be identified, Fujimoto dreams of visiting there again and finding her previous keeper.

Fujimoto had engaged in volunteer work in areas affected by disasters, including the 1995 Great Hanshin Earthquake, and was seeking a way to do something for Fukushima Prefecture in the aftermath of the nuclear accident.

As he had kept a dog before, Fujimoto traveled all the way to the animal protection center by car, after he learned about stray hounds and felines caught in the aftermath of the crisis. The one-way trip to Shiga Prefecture took him two and a half hours.

Two months or so later after being adopted by her new owner, Rose suddenly regained her energy while she was taking a stroll around a nearby park in the evening. Spotting a girl about 10 years old, Rose rushed to her and sat down politely next to her.

Asked by the girl whether she could “walk with her,” Fujimoto handed over the leash to the child. Rose traveled around the park many times, running and walking beside the girl. Rose sometimes hopped as if skipping, looked up at the girl and wagged her tail.

Fujimoto had never seen Rose showing such behavior. He speculated that Rose's former owner might have had a daughter of a similar age.

Another change in Rose’s attitude was that she started wandering around and trying to find the Fujimotos when they were not with her.

Rose livened up the couple’s daily lives. Fujimoto went for a morning walk together and prepared food for her even when he returned home later than midnight.

In late 2016, Rose’s health abruptly deteriorated. The condition of her gums worsened day by day, forcing her to shy away from even softened dog food. Rose ended up refusing to even drink water. No problems had been detected in her regular checkup at a veterinary clinic.

Rose took her last breath on Jan. 19, 2017. Hearing Rose yelp briefly at her final moment, Fujimoto felt like she said “goodbye” and “thank you.”

RETURN ROSE TO HER HOMETOWN

In October last year, Fujimoto and his wife headed to Futaba by car with Rose’s remains in a pure white urn fastened in the back seat by a seat belt.

Although nearly 10 years had passed since the nuclear crisis started to unfold, they could find few people on the streets. Houses that looked new were full of dust inside, and rice bowls, chopsticks and cups were still on tables as their occupants had left them.

The landscape gave them a feeling that time was standing still there.

At the sight of “what the nuclear disaster was like,” the Fujimotos wondered how Rose spent her days before she was discovered and caught. They tried to post Rose’s picture on a flier on a utility pole and soon found it useless in looking for her owner in the deserted town.

Fujimoto and Michiyo left a message on a notebook at the waiting room of Futaba Station whose cover says “Futaba Station Notebook.” They placed a photo of Rose between the pages along with their email address.

The Fujimotos wrote: “Hello, Rose’s real owner. We affectionately looked after her.”

The couple rode around the seaside town on rental bikes. While pedaling his bicycle, Fujimoto spoke to the urn in his backpack, saying, “You are now in your hometown. Are you feeling nostalgic? Do you smell Futaba?”

Fujimoto said he wants to travel to Futaba again after the novel coronavirus pandemic ends, because more people may have returned there during the spring’s cherry blossom season following the 10th anniversary of the disaster.

He has a lot to tell to and talk about with the person who once owned Rose.