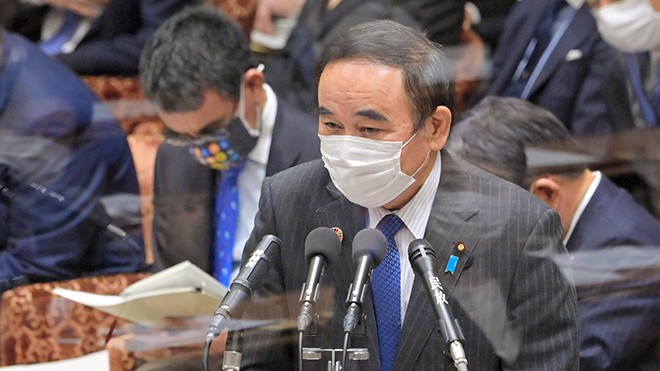 A rise in suicides stemming in large part from feelings of isolation due to the COVID-19 pandemic prompted Prime Minister Yoshihide Suga to follow the example of Britain and establish a Cabinet portfolio to battle loneliness.

On Feb. 12, Suga named Tetsushi Sakamoto as state minister in charge of coordinating measures to help those feeling isolated as a result of the novel coronavirus crisis.

Sakamoto is already the Cabinet minister in charge of regional revitalization.

When she led Britain in 2018, Theresa May established the world’s first minister to combat loneliness, which she described as the most serious public health issue confronting British society.

Japan in the past has appointed ministers to handle issues associated with loneliness, such as “hikikomori” individuals who do not leave their homes, often for years, and solitary deaths.

When Suga met with Sakamoto on Feb. 12, he told him to promote comprehensive measures cutting across ministry jurisdictions. Suga pointed to an increase in suicides among women due to the COVID-19 crisis and other issues of loneliness stemming from requests from the government to refrain from unnecessary outings.

At a subsequent news conference, Sakamoto commented that “societal ties in general have become weaker.”

He pointed to measures already in place to reduce the suicide rate, citing programs to look after senior citizens who live alone and child poverty. But he said he would work so that those in need of government help would receive appropriate help.

A forum will be held later in February bringing together those in nonprofit organizations who have worked on issues related to loneliness to iron out areas that need further work.

A group of ruling Liberal Democratic Party lawmakers formed a study group in January to look into the matter.

Lower House member Takako Suzuki, one of the group organizers, said during the Feb. 4 Lower House Budget Committee session: “We have to find ways to reduce the number of people suffering from loneliness they never wanted. There is a need for a grass roots approach.”

Suga may have created the position out of embarrassment he felt at a Jan. 28 Lower House Budget Committee when an opposition lawmaker asked him which minister was in charge of loneliness.

Suga said Norihisa Tamura, the welfare minister, was in charge, but Tamura himself looked puzzled and responded that he did not recall being given the assignment.