Aerial footage taken on Feb. 14 shows landslides and other damage caused by the earthquake in Fukushima Prefecture. (Masahiko Endo) 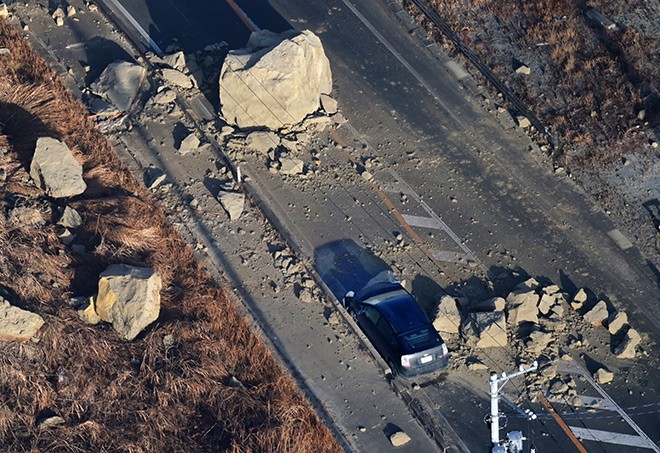 A car in Soma, Fukushima Prefecture, sits damaged on Feb. 14 after boulders crashed down on a road in a landslide caused by a powerful earthquake the previous night. (Ryo Kato)

More than 100 people were injured in a magnitude-7.3 earthquake that struck on Feb. 13 in the same Tohoku region that was devastated by the Great East Japan Earthquake and tsunami 10 years ago.

As of 9 a.m. on Feb. 14, at least 102 people in seven prefectures, including Fukushima and Miyagi, were confirmed to have been injured in the quake that occurred the previous night, triggering widespread blackouts, local authorities said.

No deaths were reported.

The temblor hit at 11:07 p.m. Its focus was off the coast of Fukushima Prefecture at a depth of 55 kilometers, the Japan Meteorological Agency said.

No tsunami warning was issued.

The agency labeled the quake a likely aftershock of the magnitude-9.0 Great East Japan Earthquake that struck the Tohoku region on March 11, 2011, leaving nearly 20,000 dead or unaccounted for mainly as a result of towering tsunami generated by the event.

The agency called on the public to remain alert over the coming week or so, citing the likelihood of more temblors of a scale similar to that of the Feb. 13 quake hitting, particularly in a few days for now.

The quake was felt as far away as Hokkaido, the northernmost main island, and the Chugoku region in western Japan as well as Tokyo.

The quake measured upper 6 in seismic intensity on the Japanese scale of 7 in Zao, Miyagi Prefecture, as well as Kunimi, Soma and Shinchi in Fukushima Prefecture.

East Japan Railway Co. (JR East) on Feb. 14 announced that it will take 10 days or so to resume full operations on the Tohoku Shinkansen Line due to earthquake damage, such as leaning utility poles between Shinshirakawa and Furukawa.

JR East added that runs between Tokyo and Akita, will also be suspended on Feb. 15.

Other bullet train services on the Joetsu, Hokuriku and Tokaido lines are operating as usual.