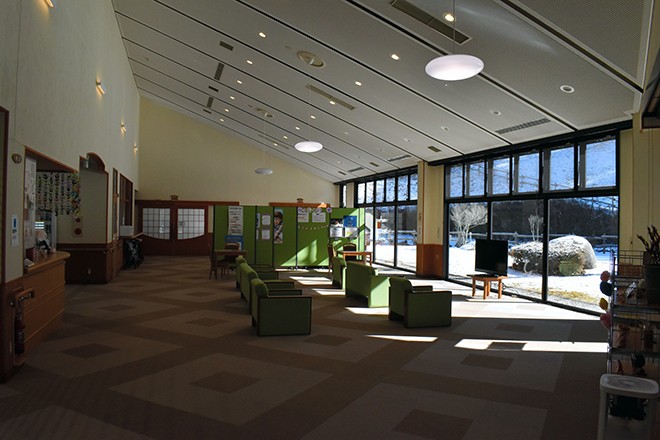 The room temperature is kept lower than usual and some lights remain turned off at the Midori no Sato Seseragiso retreat in Katsurao, Fukushima Prefecture, on Jan. 29. (Shinichi Sekine)

KATSURAO, Fukushima Prefecture--The struggles of a renewable energy supplier forced Katsurao village facilities to reduce electricity use at the height of winter, a blow to efforts to wean the area off nuclear power.

Katsurao Electric Power Co., a new entrant in the electricity retailing market, procures additional energy to make up for shortfalls in its supply, but wholesale prices soared in a winter power crunch from December to January.

“New entrants can’t go on like this,” said Seiichi Suzuki, vice president of Katsurao Electric, which supplies electricity to about 130 homes here.

The solar power producer was established in 2018 in Katsurao, a village of about 400 people. The March 2011 disaster at Tokyo Electric Power Co.’s Fukushima No. 1 nuclear plant forced all villagers to evacuate. Some areas remain under the evacuation order.

The company’s goal is to promote widespread use of renewable energy.

The village office, which aims to achieve local production of renewable energy for consumption in Katsurao, not only dispatched the vice chief to serve as company president but also invested 22 million yen ($209,600) in Katsurao Electric, or more than half of its capital.

Many new entrants must procure additional electricity from the wholesale market to make up for shortfalls of their own generation facilities. Katsurao Electric is no exception.

But the market price increased from mid-December due to tight supply and demand caused by a cold wave. On Jan. 15, the price reached a peak of 251 yen per kilowatt-hour, more than 30 times the conventional price.

Katsurao Electric has been hit hard because its solar power generation facilities produce less electricity during winter months, making it rely on the wholesale market for 70 percent of its supply.

But it is difficult for the company to increase its own prices because it has won contracts by offering a rate that is 1 yen cheaper per kilowatt-hour than that of Tohoku Electric Power Co., the large utility that serves the region.

It was left with no choice but to ask several village facilities that consume a lot of electricity to save energy in mid-January.

At local welfare center Midoriso, 10 of 13 floor heaters that reserve heat during the night are in disuse, with gas-powered air conditioners replacing their functions.

At Azeria, a sightseeing and exchange facility, and the Midori no Sato Seseragiso retreat, the room temperature is set 2 to 3 degrees lower than the regular temperature of 26 degrees.

The outside temperature could drop to almost minus 20 degrees during the winter, but a senior village official said the energy-saving efforts will last until around March.

Katsurao Electric has installed 5 kilometers of power-transmission cables in the village center and also generates and stores solar power for local consumption. It was planning to use part of the proceeds from electricity retailing and other operations for reconstruction of the village.

Following the nuclear disaster, TEPCO decided to decommission all 10 reactors at its Fukushima No. 1 and No. 2 plants. The prefectural government has set a goal of meeting 100 percent of the prefecture’s electricity needs with renewable energy by 2040.

Katsurao Electric’s efforts in conjunction with the village office also serve as a touchstone for the prefecture’s initiative to switch from nuclear to renewable energies.

“New entrants are like newborn babies. We want the central government to remedy the situation as it has set a goal of realizing a decarbonized society,” said Takuya Ishida, chief of the reconstruction promotion office at the village office.

The Ministry of Economy, Trade and Industry has come up with measures in response to the situation, including the Jan. 17 introduction of an upper limit of 200 yen per kilowatt-hour for charges paid by new entrants to regional utilities when they need to procure more electricity than originally planned.

But there are doubts about the effectiveness of the measures.

“Payments for the charges for the period when market prices sharply rose are due at the end of March. Many new entrants could run out of money if there is no support,” said Naoko Hashimoto, president of Sukagawa Gas Co. in Sukagawa, Fukushima Prefecture, which also retails renewable energy..