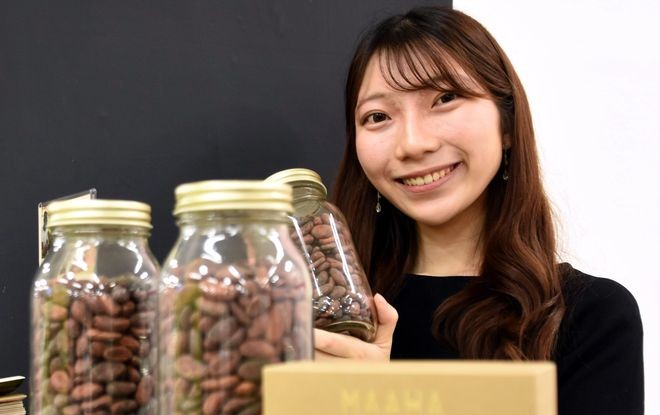 A Japanese college student's encounter with the underbelly of Ghana's chocolate industry shattered her romantic image of her favorite sweet.

Ai Taguchi hasn't seen chocolate the same since she flew to the world-famous producer of cacao beans in Africa to see how it was produced firsthand. Cacao beans are key ingredients in making chocolate.

“I love chocolate but I knew nothing about what was behind it,” Taguchi said.

Conditions were so appalling at the cacao farm Taguchi visited that she witnessed a mother in a farming household die of malaria because she could not buy medicine. Farmers were so desperate to make a little extra cash that Taguchi noticed they put pebbles inside cacao beans for sale so they could be traded at higher rates--even though the difference in dollars was a pittance.

It was far from what Taguchi had expected, who, as a child, looked forward most to receiving “chocolate in shiny wrapping paper” at her great-grandfather’s home.

She grew up associating the sweet taste of chocolate as comfort food that gave her encouragement and solace on many occasions.

Wondering what kind of people were “making such a delicious thing,” Taguchi headed for Ghana on wages from her part-time job three years ago.

But what awaited her there was the harsh reality of cacao farmers struggling in dire poverty. Because of insufficient quality control, their harvests were purchased at unreasonably lower prices.

She couldn't stand to see it continue.

Looking for a way to help the farmers, she concluded that if they raised better quality cacao beans, it would earn them higher market prices, a win-win for both Ghanaian producers and Japanese consumers.

She then took steps to establish a fair trade practice in Ghana.

While studying at university, Taguchi visited plantations in Indonesia and Taiwan to gain knowledge on cacao culturing. She held talks with the Ghanaian government, which then bought up cacao at a predetermined price.

Using money from a crowdfunding campaign and part-time work, Taguchi set up a chocolate factory in Ghana. She started selling chocolate in Japan under her own original brand Maaha earlier this year.

Taguchi said she can't forget the smiles of cacao farmers she met in Ghana when she saw them eat chocolate for the first time in their lives.

Most of the farmers she met "didn't know what chocolate tasted like,” Taguchi said, who through her work has won the firm confidence of local residents in the farming community and currently spends half the year in Ghana.