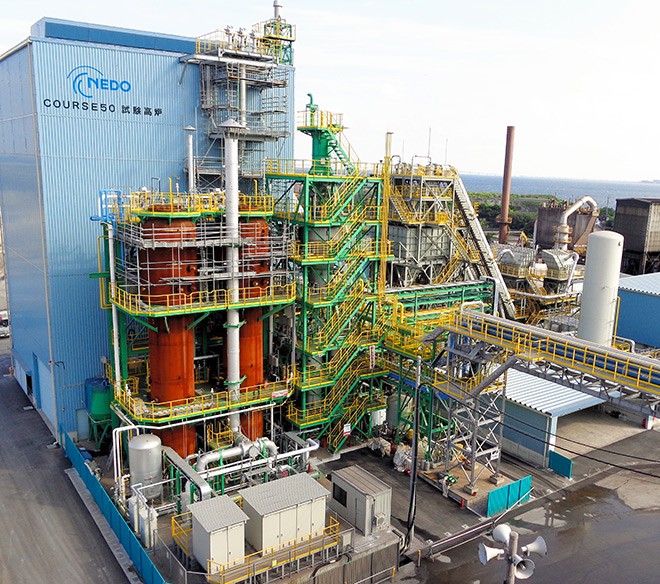 A test blast furnace that makes iron with hydrogen is located in Kimitsu, Chiba Prefecture. (Provided by Nippon Steel Corp.)

A Japanese steel industry group has moved up its goal of achieving net zero CO2 emissions in the industry by 50 years, with the target year now set for 2050.

The goal brings the steel producers in line with Prime Minister Yoshihide Suga's pledge for Japan to go carbon free by 2050.

“We agree with the government policy of becoming carbon neutral by 2050 and will take on the challenge aggressively," the Japan Iron and Steel Federation (JISF) announced in a statement on Feb. 15.

In November 2018, the steel federation had set a goal of achieving net zero CO2 emissions by 2100, before the government announced its goal last autumn.

However, as the JISF has announced virtually the same efforts it plans to make to reduce the CO2 emissions as when it set the 2100 target, there seems to be little grounds for it to achieve the goal.

The steel industry emits 14 percent of all CO2 emissions in Japan and is the largest emitter among manufacturing industries.

To achieve a carbon-free industry, it is necessary to replace coke, which is used in the iron-making process, with hydrogen.

Kobe Steel Ltd. announced on Feb. 16 that it successfully reduced CO2 emissions by about 20 percent by using less coke in an iron-making experiment.

But zero emissions is a high hurdle for the industry.

First, the technology of the iron making with hydrogen must be developed along with procuring a large amount of cheap hydrogen and power. In addition, the practical applications of a method for trapping carbon dioxide emissions and burying them underground or recycling CO2 into a usable chemical material should be achieved.

The JISF admits that it will be difficult to accomplish the goal by 2050.

Masaaki Izumiyama, a JISF official and the environment division director of Nippon Steel Corp., said of making iron with hydrogen, “There is no foundation even now with the high hurdles that humankind is facing.”

Hiroyuki Tezuka, specialty chief of JFE Steel Corp., pointed out the limitations of the industry.

“The things that we can change are very few,” he said.

A senior official of a steel manufacturer said, “No one in the steel industry thinks that we can really achieve the goal of zero emissions in 2050.”

In addition, the government is considering introducing a carbon pricing system to lower emissions.

Carbon pricing would impose charges for carbon dioxide emissions as a financial incentive for emitters to cut down on the amount of greenhouse gases they produce.

The Environment Ministry and the economy ministry will start discussions later this month.

“The funds for research and development will disappear,” he said.

The steel industry has suffered from declining domestic demand due to the declining birthrate and aging population and also lower profitability because of the emergence of the Chinese steel industry.

It now faces the new challenge of going carbon free within three decades.

(This article was written by Eisuke Eguchi and Takao Shinkai.)