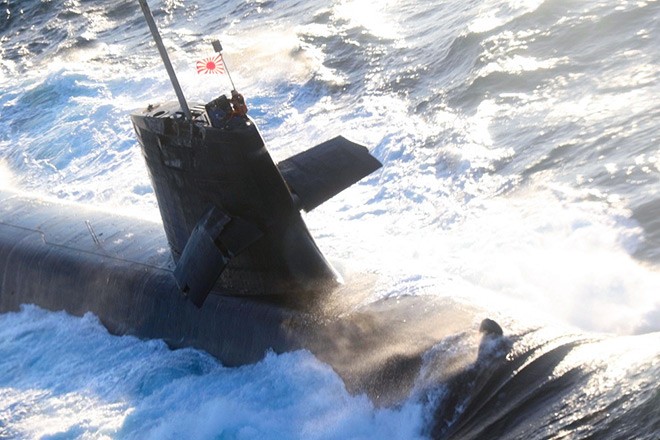 The damaged Maritime Self-Defense Force submarine Soryu off the coast of Kochi Prefecture on Feb. 8 (Provided by the 5th Regional Coast Guard Headquarters)

The Maritime Self-Defense Force submarine Soryu's failure to detect a cargo ship in time to avoid slamming into it while surfacing was likely due to the crew not checking a blind spot in its sonar, investigative sources said.

The Hong-Kong registered commercial vessel was approaching just behind the Soryu on Feb. 8 when the sub surfaced. The submarine’s sonar has difficulty detecting vessels that are behind it.

Investigators with the Japan Coast Guard’s 5th Regional Headquarters suspect professional negligence endangering traffic by crew members may have caused the accident that occurred in waters off Kochi Prefecture, injuring three aboard the sub.

The Soryu, with a crew of 65, was engaged in a routine training exercise when it crashed into the bulk carrier Ocean Artemis on the morning of Feb. 8.

At the time of the accident, it was surfacing to periscope level.

The Ocean Artemis sustained scars from the impact to its bulbous bow, the protruding bulb at the front of a ship located just below the waterline, according to the sources.

The sub sustained extensive damage to its starboard hydroplane, which helps it control its depth.

Investigators believe that when the collision occurred, the Ocean Artemis was approaching the Soryu from behind and overtaking it on its starboard side, the sources said.

But the sonar equipment is in the submarine’s bow to insulate it from the propeller noise in the rear, creating a blind spot called a baffle directly behind the submarine.

To prepare for surfacing, a submarine is supposed to change its course to check all directions and to ensure no vessels are in its vicinity.

At the time of the accident, the Soryu was on a training exercise to get its crew members back to work after it had undergone routine maintenance.

Investigators suspect that the collision resulted from crew members' failure to monitor all directions and not spotting the Ocean Artemis approaching from behind and to share information, according to the sources.

The law on preventing collisions at sea obliges all vessels to take precautions necessary to avert a collision, such as placing crew on watch and taking avoidance measures.

But the law is based on the premise that all concerned vessels are above water and aware of where they are in relation to each other.

“Under normal circumstances, no one aboard a ship anticipates that a submarine will emerge from the water,” a Coast Guard official said. “It's only natural that the submarine should have been the one to take avoidance action.”

Another possible legal violation on the part of the Soryu is that it was unable to report the accident for more than three hours because the collision had knocked out its communications system.

The mariners law stipulates that the vessels involved in a collision are required to report their names, owners, ports of registry and ports of sailing and destination to authorities.

The MSDF considers the submarine’s communication failure deeply troubling and plans to introduce satellite mobile phones and other communications equipment to its submarines to prevent a recurrence.

For the time being, the MSDF will equip its subs with satellite mobile phones already in its possession.

(This story was written by Yoshitaka Ito, Shun Niekawa and Yuri Nishida.)