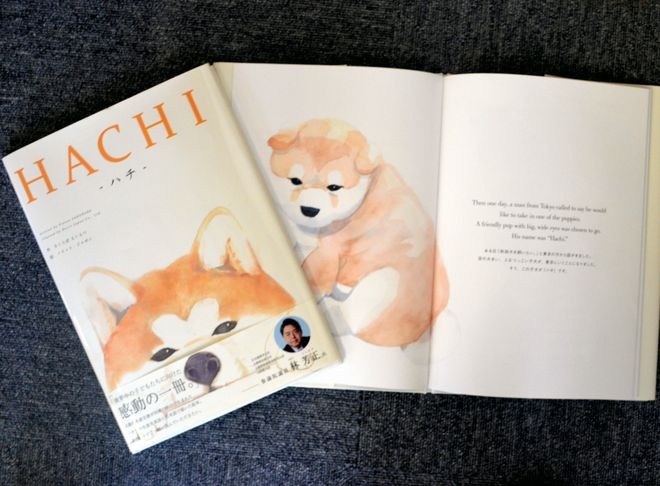 ODATE, Akita Prefecture--A new picture book on Japan's favorite canine, Hachiko, will give kids in English-speaking countries a chance to learn about his inspiring legend.

"Hachi" by Eietsu Sakuraba, written in junior high school-level English, accompanied by Japanese text, comes out on March 8, the anniversary of the beloved Akita Inu dog's death in 1935.

"I wrote the book imagining a scene where parents read it to their young children in a foreign country," Sakuraba, 64, said during an online announcement of the publication. "I hope it helps attract many visitors to Odate and promotes the charms of the town and Akita Inu."

Sakuraba has served as a special adviser in charge of regional revitalization for Odate, Hachiko's hometown, since 2018.

He said he was moved to pen the book featuring Illustrations by Norit Japon Co., after visiting Tokyo's Shibuya Station, famed for its iconic Hachiko statue, only to discover many non-Japanese people there didn't know the iconic dog's story.

He was further encouraged to create the self-published book, when he found little had been published about Hachiko in English.

The book, based on historical facts, follows Hachiko from birth to living with Hidesaburo Ueno, culminating with the famous scene where the dog waits for Ueno's return at Shibuya Station for 10 years after his owner's death.

A native of Katagami, also in Akita Prefecture, Sakuraba joined the Ministry of Agriculture, Forestry and Fisheries after graduating from college. He was the chief of the Food Industry Affairs Bureau when he retired.

As part of regional revitalization efforts, he was involved in a project to develop a beer made with a local specialty of 'edamame' green soybeans.

An Akita Inu dog featured on the beer's label first sparked his interest in creating a Hachiko picture book. The artwork was done by Akita-based Norit Japon, which handles development and sales of local products, which he later tapped to do his illustrations.

Three thousand copies of "Hachi" are to be published and can be purchased for 1,800 yen ($17), excluding tax, at a shop at the Akita Inu Tourism facility, Amazon and other bookstores.