Nagoya Castle to be stripped of mythical statues for a while 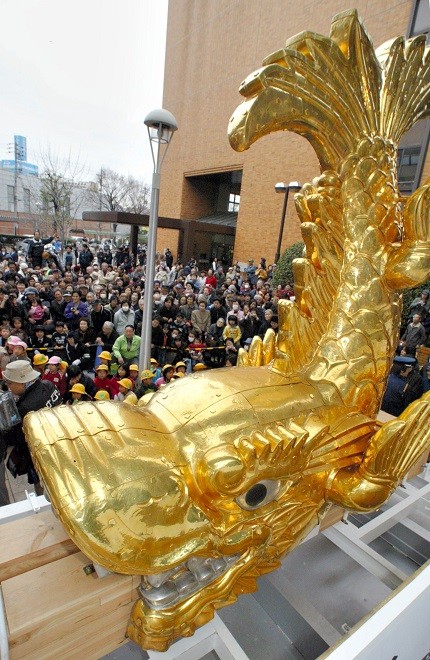 After being removed from atop Nagoya Castle, a golden "shachihoko" fish-shaped ornament is placed on the ground near the Kita Ward office for the New Century Nagoya Castle Exhibition on March 23, 2005. (Asahi Shimbun file photo)

NAGOYA--Nagoya Castle's most famous icon, a pair of golden statues displayed high on its roof of a mythical "shachihoko" half fish and half tiger creature, is to be removed temporarily so visitors can get a closer look by viewing it on the ground.

The beloved symbol is currently hidden from view and surrounded by scaffolding. The decision to remove the resplendent ornaments was made to support the pandemic-hit tourism industry.

The ground exhibition is hosted by an executive committee comprising city government and other organizations and will take place from March 20 and July 11.

It will be the first time in 16 years for the shachihoko to be removed from their traditional perch.

To accomplish this, they will be secured in metal frames and gingerly lowered by a helicopter. They will be transported several hundred meters to a parking lot operated by the Aichi Prefectural Gymnasium, which is also located in the castle's grounds, in early March.

They will go on display at the castle's Ninomaru Square until April 2 as part of the Nagoya Castle Spring Festival before moving to the Mitsukoshi mae Hirobas plaza in the city's Sakae district on April 10.

Visitors to the Ninomaru Square will be charged an admission fee of 500 yen ($4.75) for adults. The same admission will apply for children of elementary school age or older at the Hirobas plaza.

The executive committee is considering ways to allow visitors to touch the ornaments at Hirobas.

The shachihoko will be returned to the top of the main keep in mid-July and the scaffolding is scheduled to be removed in mid-August.