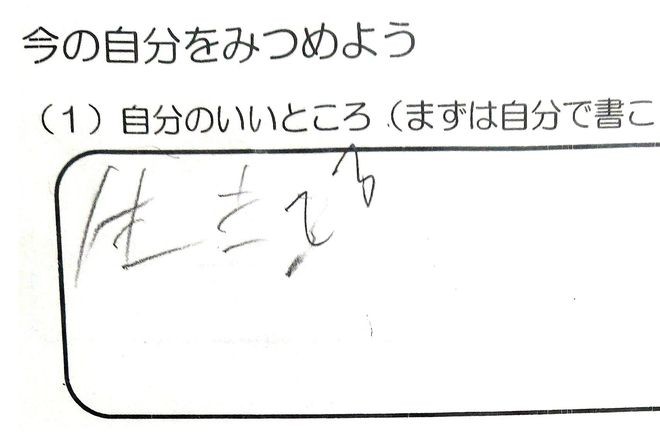 A question on a worksheet, which the woman’s fourth-grade son brought home from school, asks the respondent to name his or her own “strong point.” Her son’s response reads, “Being alive.” (Provided by Gorilla Mom)

A single mother first learned about things going awry with her young son when she received a message, on her way to work, through the Line messaging app.

Since she works as a nurse, the woman leaves home before her son, who was in the third grade at the time, in the morning and returns home past 8 p.m. The woman, who goes by the online name "Gorilla Mom," has to rely on her mother to get her son up and ready for school.

“I woke him up in the morning, but he didn’t get out of bed,” her mother wrote in the message in May 2019. “He is grumpy because he failed to get out of bed. He refuses to eat, throws objects and takes it out on me, saying, ‘It’s all your fault, Grandma, because you didn’t get me out of bed.’”

The message continued, “He grumbles and says he’s not going to school. Come home, please, because I can no longer cope with him.”

DISORDER SUSPECTED, BUT NEVER TESTED FOR

The woman’s son was in a day nursery when she began suspecting that he had a developmental disorder. But she had never had him tested.

“Children who allegedly have diseases and disabilities are perhaps just so labeled by their parents,” she said she was thinking at the time. “My son doesn't need to be diagnosed, and he'll get by as a nondisabled child who is just a bit recalcitrant.”

As a nurse, she thought she possessed sufficient medical knowledge of intellectual and developmental disabilities. She therefore believed she knew what such disorders were, although she now knows she didn’t.

Her son was under so much stress--a reshuffling of school classes, schoolwork that was becoming ever more difficult, and a daily dressing-down from his mother for what he couldn’t do.

There were so many things that he was trying hard to do but couldn’t. That led him to use foul language and violence and develop an aversion to going to school.

“Hey, Mom, tell me how I can die,” the boy began asking his mother in the end.

“If my son were to die today in an accident or whatever, I would join him in death,” the woman said she thought at the time. She was under enormous emotional stress.

She turned to a school counselor for advice, whereupon she received the suggestion to take her son to a psychiatrist, which she did in September 2019. The boy was diagnosed with attention-deficit hyperactivity disorder (ADHD), oppositional defiant disorder and a mild intellectual disability.

The woman decided to receive “parent training,” as his mother, from a hospital clinical psychologist.

She was trained to divide her son’s behavior into “desirable” behavior, an “undesirable” one and a “dangerous and unacceptable” one, and devise ways to deal with each of the three categories in different ways.

She also learned about praising her son not just when he completed a task but also before and when he set out to do one.

The state of her son began to change. He resumed going to school almost every day, and he stopped running away from home.

In October last year, the woman’s son, now in the fourth grade, brought home a school worksheet that he had filled out during a moral education class.

“Think about a secret for realizing goals,” a question on the worksheet said, and his written answer read, “Getting encouragement from Mom.”

The woman couldn’t hold back her tears the moment she saw that statement.

She believed that her son hated her, because he used to curse her, such as saying, “I hate you,” and “Drop dead!” She now knew that wasn’t true.

She realized that her relationship with her son, which she believed was on the rocks, had now been restored.

Her son came home with another school worksheet in November. One question on it asked respondents to name their “strong point.”

Her son’s written answer couldn’t have been shorter. It only said, “Being alive.”

The woman hugged him tightly as soon as she finished reading his worksheet.

“Yes, you are right,” she said she thought at the time. “You are ‘very good’ just being alive, because nothing in this world can be taken for granted.”

She received a flood of reactions when she took a photo of the worksheet and posted it on Twitter.

“I felt encouraged, thinking that I am fine just as I am,” one comment said.

“Society is becoming ever harder to live in,” the woman said. “Why doesn’t everybody have more esteem for each other?”

The experience in raising her son has taught her that the simple act of “praising” alone can change many things for the better.

She believes the moral “you are ‘very good’ just being alive” applies not just to her son but also to everybody else.