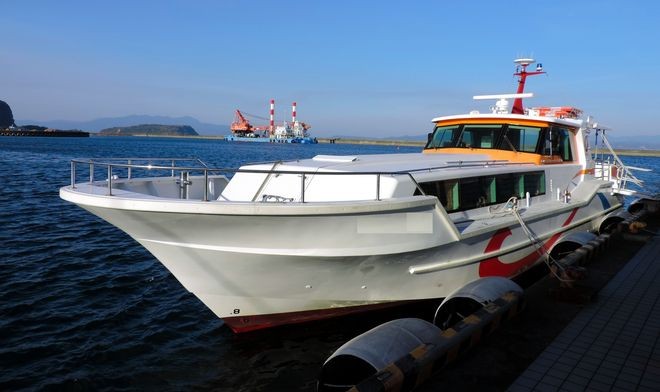 The Nankyu small passenger boat was hit by high waves in December 2019, causing spinal fractures in nine individuals seated at the bow. (Provided by the Japan Transport Safety Board)

Nearly 70 percent of passengers seriously injured in small boats suffer spinal fractures, and most of them are seated in the front of the vessel, a study has shown.

The analysis was undertaken by the Japan Transport Safety Board, a government body that studies the causes of ship, aircraft and railroad accidents.

A JTSB official advises passengers aboard small boats to move to the stern where the pitch and roll are less severe, especially in winter, when the waves are high.

According to transport ministry figures, 2,200 passenger boats are operating in Japan, and 70 percent of them are small vessels with a gross tonnage of less than 20 tons.

These small boats are typically used along short-sea routes with relatively few passengers.
Although small boats are more susceptible to the impact of waves, they are not required to be fitted with seat belts. The exemption is designed to allow passengers to immediately escape in accidents that cause the vessel to sink.

But that leaves passengers susceptible to falling on their seats on their backsides and breaking their spines when high waves rock the boats.

In December 2019, 14 of the 55 passengers aboard the Nankyu, a 19-ton passenger vessel, were injured when it was shaken violently by high waves off Kagoshima Prefecture. Nine of them fractured their spines from hitting their backsides against their seats. All of those with the fractured spines were seated in the three frontmost rows, officials said.

The JTSB studied the 115 passenger boat accidents with casualties that occurred between 2008 and 2019. Twenty-eight of those accidents involved small vessels and resulted in at least one serious injury each.

In total, 37 individuals were severely injured. Twenty-five of them in 16 of the accidents had spinal fractures, accounting for 68 percent of the serious injuries.

According to published reports on boating accidents, 28 of 29 individuals with severe or minor spinal fractures were seated at the bow, the officials said.

Passengers on those front seats are more at risk of spinal fractures because the bow is further away from a vessel’s center of gravity, which is closer to the stern, where its engine is installed.

Seats near the bow undergo larger roll and pitch when the ship is jolted by waves, the officials explained.

Slower-moving vessels are subject to smaller sway and rock, so reducing speed when the waves are high can prevent injuries.

However, four of the accidents that caused spinal fractures involved boats traveling at relatively low speeds of less than 10 knots (19 kph).

A JTSB simulation also showed that passengers seated near the bow could be injured by waves of 2 meters in height unless the speed is dropped to 8 knots.

The COVID-19 pandemic has taken a toll on Japan’s passenger boat industry. Many operators saw year-on-year drops in passenger numbers of more than half as of last spring, although the situation improved toward the end of last year.

“High waves are common in wintertime, so we advise operators to think about reducing their ship speeds or even suspending their services,” said one JTSB official. “We also advise passengers to try and take back seats, if possible, when they take a ride aboard a small vessel.”