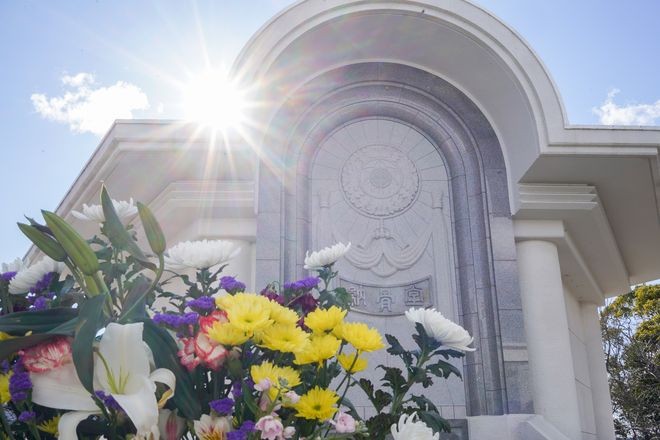 The ossuary is seen at the National Sanatorium Oku-Komyoen in the Okucho district of Setouchi, Okayama Prefecture, which accommodates dissected residents, on Feb. 8. (Takuya Tanabe)

SETOUCHI, Okayama Prefecture--For 60 years, leprosy patients may have been improperly dissected at a long-established sanatorium here, a practice that its operator is now investigating.

The National Sanatorium Oku-Komyoen announced its residents were anatomized on its grounds following their deaths at least from its opening in 1938 through 1998.

However, proper approval by patients for the postmortem examinations may not have been given.

“Doubts remain on whether sufficient explanations were offered to gain consent,” said Yoshinori Aoki, director of Oku-Komyoen. “We will figure out what was going on at the time to restore residents’ honor, so we will never repeat the same thing."

Such details as how many people were dissected, why postmortem examinations were carried out and whether patients’ consent was properly gained are not known.

Oku-Komyoen has started surveying related documents and is expected to interview officials involved.

Takeshi Oku, 79, head of the group of residents at Oku-Komyoen, expressed his expectations for the survey.

“Not so much time is left for residents,” Oku said. “I want correct examination results to be passed down for posterity.”

Last year, the National Sanatorium Kikuchi Keifuen in Koshi, Kumamoto Prefecture, admitted that not less than 389 residents who died there were anatomized over more than half a century.

All patients were supposed to sign a written agreement for dissection at the time of admission or elsewhere, so a report noted the facility “cannot avoid criticism that human rights were disregarded.”

Inspired by the move, Oku-Komyoen set up a 12-member human rights committee consisting of residents, lawyers and others to look into the issue.

The panel met in late January.

Aoki told the attendees that documents were discovered in the facility that show postmortems started at the beginning of its operations and continued through 1998 even after the leprosy prevention law was abolished.

Written consent for dissection as well as a list of the dissected by age were reportedly found as well.

Oku-Komyoen was introduced as the successor to the public-run Sotojima Hoyoin sanatorium in Osaka Prefecture for people with leprosy, or Hansen’s disease, which was destroyed by the 1934 Muroto typhoon.

It was relocated to Nagashima island off Setouchi in the Seto Inland Sea in 1938, and accommodated 1,100 or more patients in the peak period during World War II. Currently, 72 residents with an average age of 87.6 live at Oku-Komyoen.

In 2005, 820 specimens of internal organs and other body parts, along with 49 fetuses, turned out to have arisen from the postmortem practice at Oku-Komyoen in a survey by a third-party organization commissioned by the health ministry.

Comparing its death toll through the 1980s with the specimen number showed more than 90 percent of dead residents were targeted under the program, leading to the third-party group’s notion that “dissection was conducted totally routinely.”

The research by the human rights panel will focus on why the tradition was established. The postmortem examination and corpse preservation law, promulated in 1949, stipulates that dissection must aim to “contribute to medical education or research.”

“We will make clear what happened then, such as how the corpses were treated,” said lawyer Tsuyoshi Kondo, chairman of the committee.

The study will cover not only doctors and clinical examination technicians who attended dissections but also residents and former staff members at Oku-Komyoen to get an overall grasp of the problem.

The panel will also examine whether enough attention was paid to human rights and if postmortem processes were appropriate.

Kondo said he cannot forget what he saw at Oku-Komyoen in October 2000, when he was head of the defense team’s secretariat in a case where residents questioned the state’s responsibility and called for compensation over its isolation policy.

The suit was filed with the Okayama District Court, though a settlement was later reached.

The court staff visited the old dissection and morgue facility on the site of Oku-Komyoen for evidence preservation, because the plaintiffs would like them to “see a place representing how dissection was carried out.”

Kondo and judges opened the door in front of the one-story morgue building and entered the dissection room. At the center of the dissection room, they found a silver autopsy table equipped with a faucet, which looked like a kitchen sink.

In the corner of the room were a number of resected organs in plastic containers on the floor. They appeared to have been carelessly put into the containers as whom they came from or which organ they were are not shown on the cases.

Opening another door, they went into the organ storage chamber behind the dissection room. Wooden shelves stood tall to the ceiling and were lined with bottles with formalin-soaked viscera.

A shelf labeled as “fetuses artificially delivered prematurely” displayed fetus specimens, including one with emerging hair.

“I doubted that the specimens were utilized for medical objectives,” said Kondo. “Unless research takes place right now, the actual conditions of the dissection might be lost to history.”