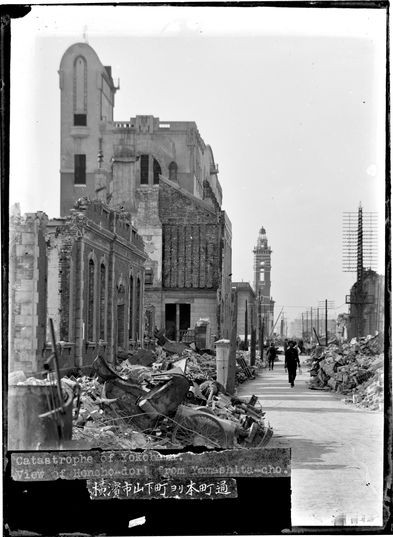 People are seen walking through rubble from damaged buildings in central Yokohama. The clock tower of a building to commemorate the opening of Yokohama Port can be seen in the background. (Provided by the Yokohama Archives of History)

YOKOHAMA--Historic negatives that capture the destruction to this port city close to Tokyo caused by the 1923 Great Kanto Earthquake are causing a stir among researchers.

Twenty-eight glass dry plates discovered by chance in 2018 vividly illustrate burned-out buildings in the city's central Chinatown district and warships from not only Japan but also overseas arriving at Yokohama Port to assist in relief activities.

“The discovery is important in ascertaining the earthquake damage caused to Yokohama,” said an official of the Yokohama Archives of History in Naka Ward here, which analyzed the negatives.

Glass dry plates were widely used at photo studios in town at the time. The images are presumed to have been taken by Yokohama-based photographer Yoshinosuke Nishino (1881-1952).

The plates were uncovered by one of Nishino’s grandchildren while rummaging in a box in fall 2018 at the former site of Nishino's photo studio in Kamakura, also in Kanagawa Prefecture.

At the family’s request, Ritsuto Yoshida, an inspector and researcher at the Yokohama Archives of History, examined them.

“Glass dry plates are vulnerable, so it is something of a miracle that so many plates survived after nearly 100 years,” said Yoshida in a surprised tone.

As the photos show the Imperial Japanese Navy’s battleship Ise anchored in Yokohama Port and a not-yet-repaired bridge over Nakamuragawa river, they are estimated to have been snapped around Sept. 10, 1923, just 10 days or so following the disaster.

The negatives portray panoramic views of a residential area of Yokohama gutted by fires and people walking between collapsed buildings. Though some of the photos appeared in prewar publications detailing the magnitude-7.9 quake and infernos that resulted, it was not known who took them.

The negatives can be enlarged to show scenery in more detail than is possible with printed photographs, according to the archives representatives.

Noting that this year marks the 10th anniversary of the Great East Japan Earthquake and tsunami disaster, Yoshida said the negatives are “precious materials that will help people learn that Yokohama was also severely affected by a huge quake nearly a century ago.”

The dry plates, combined with other articles, will be exhibited at the Yokohama Archives of History in a special display, “Captured Through Their Lens: Yokohama Photographers at the Time of the Great Kanto Earthquake,” until April 18.

Admission is 200 yen ($1.90) for adults and 100 yen for children attending elementary and junior high school. The facility closes on Mondays.