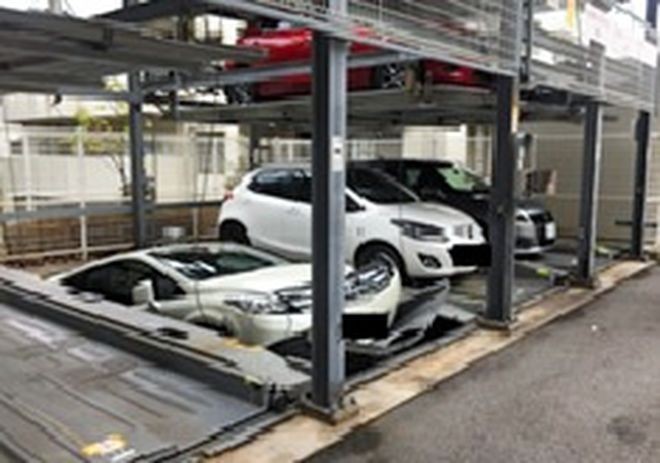 A car pallet is seen caved in at a mechanical multistory parking garage. (Provided by the Consumer Safety Investigation Commission)

Shoddy or even nonexistent maintenance has added to the potentially lethal dangers of mechanical multistory parking garages installed in apartment buildings, a government panel warned.

The rotating pallets holding the vehicles have been known to pin and injure people who enter the garages when the machinery is moving.

A government study also found that long-term degradation of garage components has caused the pallets to crash down.

The Consumer Safety Investigation Commission, which reports to the Consumer Affairs Agency, published a written recommendation on Feb. 18 for the transport ministry to take measures to ensure that such garage components are replaced appropriately on a regular basis.

The transport ministry said it received reports about 11 cases of fallen car pallets in parking garages from their manufacturers and maintenance checkup service providers between fiscal 2017 and fiscal 2019.

One of those accidents resulted in an injury.

In three of the 11 accidents, cars fell along with the pallets. Residents of apartment buildings where those three incidents occurred asked the CSIC to investigate the accidents.

The CSIC’s study determined one accident was caused by a ruptured wire rope for lifting and lowering a pallet. The other two incidents involved failures in a pallet-driving motor.

The study pointed to long-term degradation of garage components in all three cases.

The three parking garages had been installed between 2003 and 2007. The components had been in use for one to 10 years past the period of regular replacement recommended by the respective manufacturers, officials said.

The maintenance service providers had recommended the residents’ associations of the apartment buildings, which own the garages, to replace the components in question along with other equipment.

The service providers, however, had failed to explain the risk of accidents, so the residents’ associations were not sufficiently aware of the need for replacements.

In two of the cases, the residents’ associations had no maintenance plan to keep the parking garages in good condition, CSIC officials said.

Multistory parking garages have been the sites of many accidents that have killed or injured people who became trapped by the moving pallets.

Barrier fences are now being installed to block people’s entry while the pallets are moving up or down.

The panel is also calling on the transport ministry to instruct manufacturers of multistory parking garages to inform residents’ associations and maintenance service providers of the risks inherent in garage components and to replace the parts to reduce the risk of serious accidents.

In all three accidents examined by the CSIC, the parking garages had undergone regular checkups every three months in accordance with the transport ministry’s guidelines. Those checkups, however, overlooked the degradation and failures of the garage components that ended up causing the accidents.

The CSIC also urged the ministry to review the list of checkup items in its guidelines and to recommend direct inspections of internal components as well as confirmations of the operability of equipment.

“We will hold talks with manufacturers and other parties in light of the CSIC’s recommendations,” a transport ministry official said.