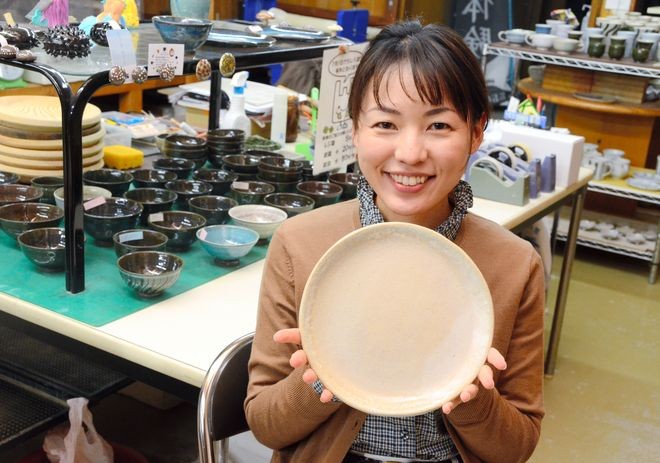 Asahi Ando shows off a ceramic plate coated with a unique glaze made from sea urchin shells. "It turned out to be a wonderful color," she said. (Yudai Ogata)

HIRONO, Iwate Prefecture--Sea urchin are a culinary delicacy, but because their shells are often seen as too difficult or costly to recycle, they end up getting tossed out in bulk.

But a local potter in this town famous for sea urchin fishing has found a way to reuse them that she thinks will turn a profit.

Asahi Ando discovered a new use for them as a pottery glaze and is now striving to make it a local specialty.

"I think plates of this color would please customers when they are used at a cafe," Ando, 37, said with a smile as she held a cream-colored plate and a mug coated with a glaze made from sea urchin shells.

She had originally moved to Hirono to help revitalize the community. It has been three years since she joined a program to promote the oceanside town, located along the Sanriku coast.

To make the unique glaze, Ando burns the sea urchin shells to ashes in a kiln before crushing and grounding them into a fine powder. She then mixes the powder with wood ash, feldspar and water. When Ando covers clay plates with the glaze and fires them at high temperatures, the pottery turns out beige or gold.

"It turned out to be a wonderful color," she said, holding up a ceramic plate she made with the technique.

Ando remembers removing her first test plates from the kiln with the help of a local pottery studio. She couldn't help but let out a gasp in awe. "Cute!"

Ando was raised in Hachinohe in Aomori Prefecture, which is adjacent to Hirono.

She worked various jobs around the city and in Tokyo before she learned that the Hirono town office was recruiting for the regional revitalization program.

Successful applicants had to live in the town, but they could receive financial aid for housing and transportation expenses.

She was encouraged by the words of a town official who interviewed her for the program: "You can blow a new wind into the community."

Ando decided to start the new challenge with her two boys, who are aged 7 and 12, in Hirono where her grandparents once lived.

She moved to the town in April 2018 to work on rural tourism and other projects, but she had to take a leave of absence from work for about two months after becoming sick in the summer of 2019.

During that time, Ando found solace in pottery.

She returned to work at the municipal government's section in charge of fisheries, commerce and industry to organize events and promote the town’s charms through its website and social media accounts.

In spring last year, Ando learned through a campaign to promote a dish called "uni-don" (sea urchin bowl) that, while their flavorful roes are used in meals, the shells are mostly being discarded.

She sought advice about this problem from her mentor at the pottery studio, who had supported her during her leave of absence. So, Ando started experimenting to make a pottery glaze and her ideas soon took shape.

In Hokkaido, which has the largest catch of sea urchins in Japan, 60 percent of a total 2,200 tons of shells were recycled into fertilizers and other products in the year ending in March 2019.

According to an estimate by Hironoya Co., a marine products wholesaler in Hirono, almost 85 tons of sea urchin shells in the town are discarded locally every year.

Recycling the shells has proven difficult. Fishermen are too busy to manage them during the peak harvesting period and many are uncertain whether they can make their profits worth the cost of fertilizer production.

Ando made about 20 works of pottery, including drinking cups and plates, from sea urchin shells provided by Hironoya in July last year. Though the number of her works is small, Ando still has some glaze left over.

She intends to stay in Hirono after her time with the regional revitalization project expires in March so she can set up a company to sell pottery.

Shizuko Niwa, 71, who operates the local restaurant Hamanasutei, said she supports Ando's decision and wants to use the plates at the eatery.

Ando said the sea urchin shells, given a new lease on life, in a way remind her of herself in that she has embarked on new challenges and faced setbacks along the way before persevering.

"I want to promote the pottery products as a new local specialty of the town famous for sea urchins," she said.