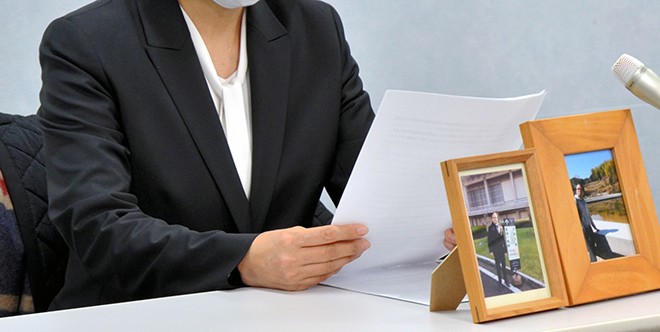 Masako Akagi calls on the government to disclose the Akagi file left by her late husband, Toshio, at a news conference in Osaka after a court hearing on Feb. 17. (Asahi Shimbun file photo)

Four years have passed since former Prime Minister Shinzo Abe offered to step down as prime minister and Diet member if he or his wife were found to have been involved in the Moritomo Gakuen scandal.

After Abe made his vow to the Diet, official documents related to the dubious sale of state-owned land to the school operator were falsified at the Finance Ministry.

While the unprecedented misconduct has shaken the foundation of democracy, the entire truth has yet to be revealed, including the motive and the chain of command involved.

One document, known as the Akagi file, may answer some of the remaining questions.

Toshio Akagi, a former official at the Kinki Local Finance Bureau, is said to have detailed how the documents were falsified and left the record at his workplace. He committed suicide allegedly because he was forced to assist in the falsifications.

Akagi’s wife, Masako, has sued the government for compensation, arguing that orders to falsify the documents led to his suicide. She has demanded the file be submitted as evidence.

Finance Minister Taro Aso declined to confirm the existence of the file during a Lower House Budget Committee session, saying that he would refrain from answering questions concerning a lawsuit outside the legal process.

He refused to answer questions when he was repeatedly asked if he would submit the file if requested by the court.

Aso also refused, on the same grounds, to submit the file for the Lower House Research Bureau’s investigation into the matter last year.

On the other hand, the government has argued during the trial that there is no need to respond to the plaintiff’s request to submit the file because there is little contention over why and how the documents were falsified.

Understandably, opposition parties have criticized the government for being double-tongued: telling the Diet the file pertains to the trial and at the same time telling the court it has nothing to do with issues of the trial.

It only seems to suggest that politicians, the Finance Ministry and the Justice Ministry, which is in charge of dealing with suits involving the government, are conniving to keep the file from being disclosed.

The Finance Ministry conducted an in-house investigation and disciplined Nobuhisa Sagawa, who was director-general of the Financial Bureau that oversaw the sale of state assets, and other officials.

The government should have no reason to withhold the file if it believes that the entire scope of the falsifications was disclosed and all related issues resolved.

Still, the government has adamantly refused even to confirm that the file exists. Its responses have been nothing but bizarre. What is it afraid of?

During a court hearing on Feb. 17, Masako Akagi said the submission of the file will be “very significant in efforts to ensure that official documents will never be falsified again after they are formally approved.”

Her remarks reflect her wish to see all government employees carrying out their daily duties with confidence and pride--something expected from a normal government.

In reference to the Moritomo Gakuen scandal, false or factually inaccurate answers were given by government officials 139 times at the Diet. That means the government has continued to make a mockery of the public over the scandal.

Suga should sincerely respond to the widow’s request and order the release of the Akagi file.