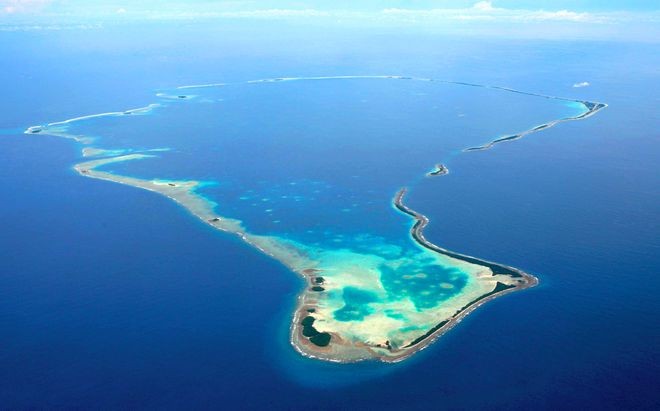 This file photo taken in 2007 shows Funafuti Atoll in Tuvalu, an island nation that is in danger of being submerged due to rising sea levels. (The Asahi Shimbun)

“Unprecedented” could be the most used adjective of 2020, too often employed to describe dire circumstances.

The end of the year brought one more use of the word, this time more positively, when the leaders of 14 countries put forward a new ocean action agenda underpinned by sustainably managing 100 percent of national waters.

Asia-Pacific nations were well represented on the High Level Panel, by leaders of Australia, Fiji, Indonesia, Japan and Palau.

This signals new or strengthened national policies that balance sustainable use of the ocean with the protection and restoration of the marine and coastal ecosystems so critical to our region for jobs, economic well-being, food and coastal protection.

If fully implemented, the pledge made in December could kick-start an unprecedented shift toward ocean management, which is so vital toward consolidating a sustainable and prosperous future for generations of people and marine ecosystems.

There are five important measures that governments can do to achieve this.

Overfishing remains one of the greatest threats to ocean health. It is fueled by policies that enable overcapacity and overfishing combined with subsidies that distort the market.

The consequences are clearly outlined in every report on declining fish stocks, and the World Bank has assessed that sustainable fisheries management generates more valuable catches with lower levels of fishing efforts. But entrenched interests make it difficult for any nation to be the first to reduce its fleet to an optimal size.

Governments should set the course and support ecosystem-based fisheries management. It is an important solution that supports nutrition and health needs.

In 2005, Australia set a good example of how to get there with a structural reform of its fisheries sectors. The “securing a sustainable fishing future” package put commonwealth managed fisheries on a path to economic and environmental sustainability with social safeguards to allow a reduction in fishing capacity without setting workers adrift.

There’s a real possibility to seize a competitive advantage by rechanneling harmful subsidies, such as fuel subsidies, into low-footprint aquaculture, especially plant-based.

The total value of the ocean is estimated at $24 trillion (2.520 quadrillion yen), yet, it suffers from severe underinvestment. In the last 10 years, only $13 billion has been invested in sustainable projects through philanthropy and official development assistance, and even less by the corporate sector.

The goods and services the ocean provides our region are massively undervalued. For example, the significant benefits of coastal ecosystems such as coral reefs, coastal wetlands and mangrove forests that act as “natural buffers” to storms are rarely quantified and accounted for in coastal protection, which means hazard mitigation and budgetary decisions are being made without fully recognizing their value.

We recommend the creation of national ocean accounts to properly inform policymaking and resource management decisions. These ocean accounts should include not only what the ocean produces (such as GDP), but also ocean income to account for benefits to people, and changes in ocean wealth, including ecosystems such as coral reefs or fish populations, so as to monitor sustainability.

Policymakers must reject fragmented sector-based--and territorial--approaches that have failed and instead move toward fit-for-purpose governance, including policy and legislation.

There are a few examples of large-scale integrated ocean management that work, such as the framework for the Great Barrier Reef Marine Park. However, there are promising frameworks under development, such as the National Oceans Policy legislation being developed for Fiji that integrates climate change, oceans and plastics or which have been recently agreed to, such as the strategy for the sustainable development of the Vietnamese maritime economy.

There is also the growing recognition of the importance of local-level integrated policy frameworks being implemented across the region, such as in Fiji through community-based integrated land-sea management in the Kubulau District, and in Japan’s Hinase area of Bizen city.

Key to the effectiveness and sustainability of all these measures is that the policy development process is genuinely participatory and inclusive of communities, indigenous peoples, the private sector and different parts of government, and is based on science.

For example, mangrove forests are a natural solution for both mitigating climate change due to their ability to sequester carbon, and adapting to its impacts on the coast, providing flood mitigation benefits worth billions on a global scale.

This sequestration potential for mangroves is particularly high in Indonesia. Indonesia, Australia, Korea, Fiji and Papua New Guinea are all part of the International Partnership for Blue Carbon, which seeks to promote and preserve the climate benefits of blue carbon ecosystems, including advice on how countries may include blue carbon in their nationally determined contributions.

Private sector incentives, such as blue bonds or reduced insurance premiums for investments in nature-based solutions such as coral reef protection and restoration, are also promising.

To tackle the massive plastics crisis, and insidious nutrient pollution expanding ocean “dead zones” starved of oxygen and life, we need to discourage wasteful and polluting business models and behaviors by making them pay their fair share and instead incentivize green businesses.

Countries such as India and Singapore are implementing market-based policy instruments to move toward a more circular economy where waste is "designed out" and products and materials are kept in use for as long as possible.

Alappuzha, a coastal city in Kerala state, India, was once called "Venice of the East" until trash clogged its canals and drains.

In 2014, the city addressed its growing waste problem by implementing a decentralized solid waste management system that includes educational subsidies for students to collect plastic waste and a penalty for the illegal dumping of plastics.

Singapore has a "toward zero waste" commitment and will introduce policies to encourage sustainable production and consumption, with new initiatives including Extended Producer Responsibility, starting with electronic waste in 2021.

Our planet’s one ocean connects us all. Inadequate policy and insufficient efforts to safeguard the ocean’s natural capital that underpins our region’s economy and well-being and delivers trillions of dollars to the global economy have fallen short.

The commitments of these 14 ocean leaders should be heard as the starter’s pistol for every other world leader. The race is on to deliver the most ambitious, future-focused sustainable blue economy strategic plan.

The Asian Development Bank and the World Wildlife Fund share a belief that Asia-Pacific can set the pace in this “race to restore.”

Together, we will support a prosperous, inclusive, resilient and sustainable Asia-Pacific, and commit to working with the governments of the region to make that happen.

Ingrid Van Wees is the vice president for Finance and Risk Management of the Asian Development Bank (ADB). John Tanzer is director of the World Wildlife Fund’s Global Marine Program.