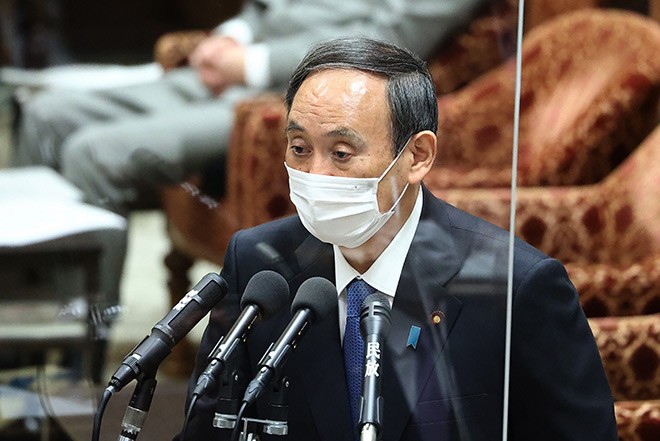 A lobbying scandal in which Prime Minister Yoshihide Suga's eldest son allegedly tried to influence the telecommunications ministry by wining and dining officials has expanded to include another ranking bureaucrat.

Makiko Yamada, the first woman to serve as Cabinet public relations secretary, was treated to an expensive dinner by Suga’s son and other Tohokushinsha Film Corp. officials when she was with the ministry in 2019.

The Ministry of Internal Affairs and Communications announced the finding on Feb. 22 as part of its investigation. It has decided to reprimand 11 officials over the scandal.

Suga’s son works for the Tokyo-based company, which produces TV programs and satellite-based broadcasting. The telecommunications ministry is responsible for issuing licenses for them.

The dinner between Yamada and the Tohokushinsha officials was held on Nov. 6, 2019, the ministry said.

Four Tohokushinsha officials were present, including the company's president and Suga’s son.

At the time, Yamada was vice minister for policy coordination at the telecommunications ministry.

On the Tohokushinsha officials, the ministry said they may have been "stakeholders."

The National Public Service Ethics Code bans central government employees from being wined and dined by people or companies in jurisdictions under their oversight.

According to the ministry, Yamada said during the ministry's investigation, “We may have talked about the situation of the overall broadcast industry, but there was no inappropriate lobbying from the Tohokushinsha side that would distort public administration.”

As Cabinet public relations secretary, Yamada serves as the moderator when the prime minister’s news conference is held. She was promoted to the position when Suga took power.

The telecommunication ministry’s announcement of Yamada's dinner comes on the heels of reports that four of its senior officials were entertained by Tohokushinsha employees, including Suga’s son, on separate occasions from October and December 2020, a possible ethics code violation.

The Tohokushinsha officials reportedly shelled out for cab fares as well and gave them gifts.

The scandal was broken by Bunshun Online on Feb. 3, a website operated by the Shukan Bunshun weekly magazine.

Apart from Yamada and the four senior officials, eight more ministry officials were treated to dinner by Tohokushinsha since fiscal 2018, according to the ministry.

Of the eight, seven were suspected of having breached the National Public Service Ethics Code, the ministry said, adding some officials claimed they had paid part of the dinner costs.

The ministry will submit a report on its findings concerning 11 officials that the ministry determined violated the ethics code to the National Personnel Authority’s National Public Service Ethics Board.

It will mete out penalties for the officials as early as on Feb. 24 if the National Personnel Authority deems them appropriate.

Suga served as telecommunications minister from 2006 to 2007. His son worked as his aide during that time.