EDITORIAL: Suga should take the lead in getting to bottom of dinner scandal 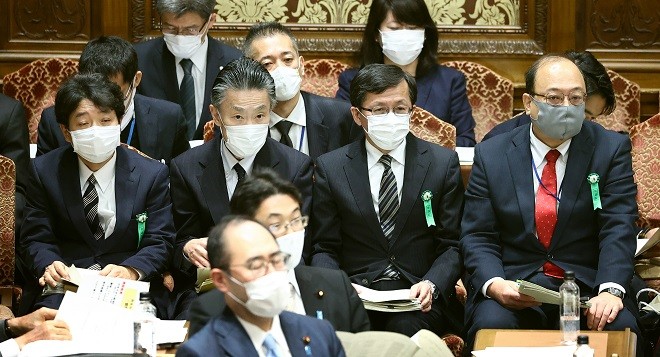 The ministry has found that a dozen senior ministry officials were treated to expensive dinners many times by the firm in clear violation of the ethics code for government employees.

The findings paint a familiar picture of the cozy relationship between bureaucrats and the industries they regulate, which has been repeatedly criticized in the past.

They inevitably raise the question of whether this corrupt nexus affected policy decisions in any way. The ministry’s half-hearted investigation cannot dispel the suspicions.

The ministry on Feb. 22 released the report on its probe into dinners paid by Tohokushinsha Film Corp. to entertain ministry officials.

The weekly magazine Shukan Bunshun lifted the lid on the scandal by reporting that Yasuhiko Taniwaki, the vice minister for policy coordination at the Ministry of Internal Affairs and Communications, and three other top ministry officials dined with Suga’s eldest son and other executives of the Tokyo-based company, which produces TV programs and satellite-based broadcasting.

The inquiry has found that apart from the four, eight more ministry officials were treated to dinner by Tohokushinsha on 19 occasions since fiscal 2018. They included the chief and a former chief of the section in charge of satellite broadcasting.

There were a total of 19 eating and drinking sessions attended by the four senior officials and Tohokushinsha employees.

A Tohokushinsha subsidiary is in the satellite broadcasting business, which means it needs to obtain a broadcasting license from the telecommunications ministry. Taniwaki and other officials involved say they did not consider Tohokushinsha to be a “stakeholder,” but their claim is totally at odds with common sense.

The ministry has decided to reprimand 11 of the 12 officials for violating the ethics code. But many questions remain unanswered. The investigation should not mark an end to the efforts to get to the bottom of the scandal.

One natural question is whether ministry officials were similarly wined and dined by other companies as well. Akimoto has admitted that they dined with Tohokushinsha employees frequently.

Why did the company receive such “special treatment” from the ministry? The most logical answer is because the prime minister’s eldest son works for the firm, although the ministry strongly denies the link.

The ministry initially said policy issues concerning broadcasting were not discussed during the sessions with Tohokushinsha. But audio data published by Shukan Bushun contradicted this claim.

It appears that the ministry has, from the beginning, been trying to turn a blind eye to inconvenient facts.

The ministry’s final answer to the question is this. In all these eating and drinking sessions, topics related to the broadcasting industry or the Tohokushinsha group may have been discussed but “there was no inappropriate lobbying from the Tohokushinsha side that would distort public administration.”

It is difficult not to doubt how seriously the ministry tried to uncover the truth. We feel tempted to suspect that the ministry only took what its officials said at face value.

In a Feb. 22 Lower House Budget Committee session, Suga apologized for the scandal, saying he was sorry that his eldest son was involved in events that resulted in violations of the ethics code by government employees. But he did not change his decision to leave the task of clarifying the facts about the matter to the ministry.

In a related development, it has also been revealed that Makiko Yamada, who was handpicked by Suga to become the first woman to serve as Cabinet public relations secretary, was also treated to an expensive dinner by Tohokushinsha when she was with the ministry in 2019.

All these facts point to problems that far transcend the ministry. Suga needs to understand the seriousness of the fact that the scandal has huge implications for the credibility of his administration as a whole.

Suga should provide effective political leadership to ensure that all possible steps are taken to uncover the full scope of the scandal, including summoning his son and other Tohokushinsha employees to testify at the Diet in response to an opposition request.