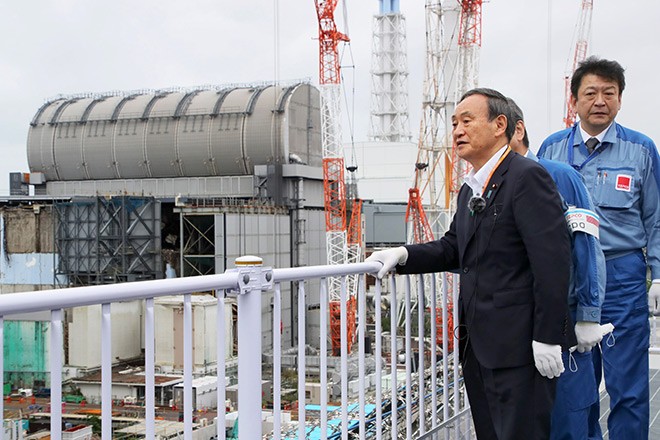 Prime Minister Yoshihide Suga visits the Fukushima No. 1 nuclear power plant in September. The No. 3 reactor building is seen in the background. (Pool)

Two broken seismometers at the crippled Fukushima No. 1 nuclear plant failed to record data from a powerful earthquake that struck off the coast of the prefecture on Feb. 13, according to the plant operator.

Tokyo Electric Power Co. became aware last year that the seismometers installed at the No. 3 reactor building were on the blink but didn't repair them, company officials told a meeting of the Nuclear Regulation Authority on Feb. 22.

The company installed the seismometers in March last year after the NRA said they would be useful in evaluating the degree of deterioration of the structure. One was placed on the top floor, and the other was set on the ground floor.

But one was broken in July and the other in October due to heavy rain and other reasons.

The seismometers at the No. 3 reactor building were not required under laws or regulations.

The NRA plans to call on TEPCO to report on how it will deal with the issue. It will also consider requiring the company to properly manage and maintain seismometers.

The magnitude-7.3 earthquake on Feb. 13 registered an upper 6 on the Japanese seismic scale of 7 in Fukushima and Miyagi prefectures.

TEPCO said the following day that cooling water had overflowed from pools storing spent nuclear fuel at the Fukushima No. 1 and No. 2 nuclear power plants due to the temblor.

The overflow, totaling three liters, was wiped off and did not escape the plant compounds. No changes in radioactivity were detected in nearby areas.

TEPCO also said Feb. 19 that contaminated water had leaked from the containment vessels of the No. 1 and No. 3 reactors of the Fukushima No. 1 plant apparently because the parts damaged by the 2011 earthquake and tsunami were subjected to strong shaking from the temblor.

The company said the leakage has remained within the plant premises, and nuclear fuel debris has continued to be cooled in the containment vessels.