A wildfire burns a forest in Ashikaga, Tochigi Prefecture, on Feb. 24. (Masahiko Endo) 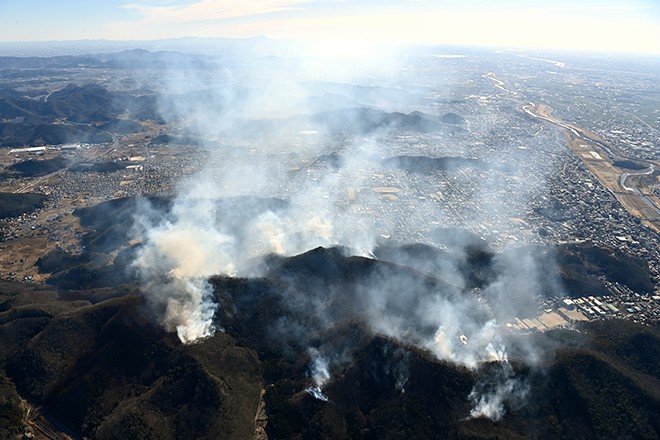 A wildfire burns a forest in Ashikaga, Tochigi Prefecture, on Feb. 24. (Takuya Isayama)

ASHIKAGA, Tochigi Prefecture--Dozens of households have been urged to evacuate here as a wildfire on a nearby mountainside continues to rage, threatening the city.

The blaze erupted on the afternoon of Feb. 21 near Mount Ryogai in the city of Ashikaga, in southwestern Tochigi Prefecture.

It was still spreading on Feb. 24 as of 1 p.m., leading the city government to ask 172 households in its path to evacuate.

A fire suppression effort by helicopters suspended the night before resumed that morning, as the Self-Defense Forces and others dispatched five choppers to drop water on the blaze.

About 10 hectares had been scorched as of the evening of Feb. 21. But officials have struggled to get a visual estimation of the damage since.

The Ground Self-Defense Force has had its efforts hampered periodically by powerful winds since joining the battle against the blaze from Feb. 22.

The fire's fury failed to abate the following day, but began burning on Mount Ryogai's east side, putting Ashikaga's city hall and the prefectural Ashikaga High School located there potentially in harm's way.

The blaze remains burning on the mountain's west side, where it first broke out on Feb. 21.

The fire has approached within about 500 meters of private homes in some areas, prompting the city government to issue an evacuation order.

It started in a mountain forest at a height of 250 meters above sea level, overlooking Bannaji temple, a national historic site, and other popular tourist spots.

Trails that run through Mount Ryogai and Mount Tengu are always popular with hikers.

A dry air advisory has been in effect in Tochigi Prefecture since Feb. 16.

The fire broke out at around 4 p.m. on Feb. 21. The fire department was notified about a blaze on Mount Ryogai's west side.

Firefighters then tackled the blaze but because of poor footing and the difficulty of supplying water to the site they could not stop it from destroying the area and spreading farther.