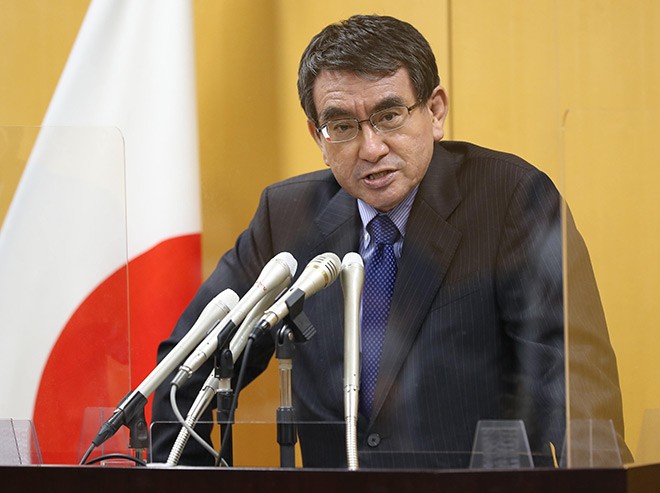 Vaccination minister Taro Kono speaks about COVID-19 inoculations for elderly people at a news conference in Tokyo on Feb. 24. (Pool)

But as not enough doses for everyone will have arrived in Japan by that date, shots will be administered in stages. Doses for about 50,000 people will be shipped to local municipalities in the week starting April 5.

Recipients are supposed to receive two shots to be properly vaccinated.

More doses will be delivered to residents of Japan's most populous areas.

Tokyo will get doses for about 2,000 people and Kanagawa and Osaka prefectures will each receive the same, said Taro Kono, the state minister in charge of administrative reform, who is also coordinating the vaccination program.

Japan's remaining 44 prefectures will then each get doses for about 1,000 people, Kono said, who was speaking at a news conference after Suga announced the vaccine rollout.

Kono did not make it clear whether special syringes that can administer six vaccinations from each vial will be ready.

He said he will ask prefectural governments to coordinate the allocation of the doses for their local municipalities.

The government plans to repeat shipments in the same amounts to those areas in the week starting April 19.

Kono said he would like to increase the amount of the doses to the level to allow them to be delivered to all the municipalities nationwide in the week starting April 26, putting the vaccination program into full-scale operation.

But he did not mention the specific amount of available vaccine doses that would be ready by that date.

Kono said he refrained from doing so because he isn't sure how many vaccine doses will arrive in Japan by that time and doses for elderly people will also fall due to the rise in health care professionals subject to the inoculations from about 3.7 million initially estimated to nearly 5 million.

Kono said that he wanted to start by running the program on a limited scale because he needs to check the operations of the vaccine delivery, the program system and the venues where shots will be administered.

He also said that the National Governor’s Association and two other local groups asked him to expand the ranges for the vaccination step by step and proceed with the program carefully.

Kono had said earlier that elderly people would begin getting inoculated on April 1 or later. Suga has also said repeatedly in the Diet that they would get shots within April.

Though vaccinations will start in April on a trial basis, until now, Kono had spoken only about doses for 550,000 or so people, or less than 2 percent of all the elderly residents who are to be vaccinated.

Vaccine doses for 263,250 recipients developed by U.S. pharmaceutical company Pfizer Inc. will arrive from the European Union on March 1, Kono said. The number of the recipients was calculated as six shots can be administered per vial.

Japan is currently administering vaccine purchased from Pfizer. The vaccine will be delivered to Japan for the third time.