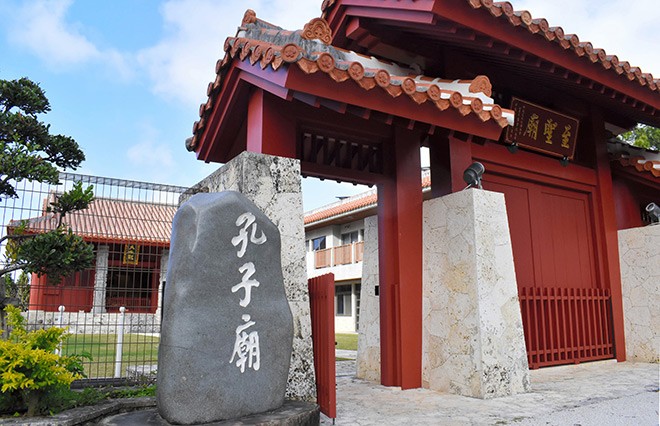 A gate and the main hall of Kume Shisei-byou, a temple dedicated to ancient Chinese philosopher Confucius, in Matsuyama Park in Naha, Okinawa Prefecture, on Feb. 12 (Shohei Okada)

NAHA--The Supreme Court on Feb. 24 ruled that the Naha city government violated the constitutional separation of politics and religion by not collecting rent from a Confucian temple on public land.

The top court’s Grand Bench said the city’s act “deserved to be judged as giving a helping hand to a particular religion.”

Of the 15 justices, Keiichi Hayashi was the only one who viewed the city’s act as “constitutional.”

At the center of lawsuit was Kume Shisei-byou, a temple dedicated to ancient Chinese philosopher Confucius, located in Matsuyama Park in the Okinawa prefectural capital of Naha.

The public ground where the temple sits covers 1,335 square meters.

Kume Souseikai, a Naha-based general incorporated association, in 2013 built facilities at the site that house a statue of Confucius and a space where people can learn about Confucianism and the history of Okinawa.

The city government accepted the association’s assertion that the facilities serve the public interest and exempted the temple from paying annual rent of 5.76 million yen ($54,400).

A female activist disagreed with the city’s decision and filed the lawsuit, arguing that the separation of politics and religion had been violated.

The Grand Bench’s ruling made no reference on whether Confucianism, which many consider a system of thought and behavior, is a religion.

The court, however, said the association’s annual ritual to welcome back the spirit of Confucius has religious meaning, and that the temple’s buildings are arranged in accordance with the purpose of conducting the ritual.

The ruling said the city government’s act to allow Kume Souseikai to use the public land for free “is considered a religious activity,” which is prohibited under the third paragraph of Article 20 of the Constitution.

The decision cited the fact that the association has been insular and refused to promote the ritual as a tourist attraction.

It also noted that the exempted rental payments were not small, and it ordered the city government to charge the association the full amount.

Earlier in the lawsuit, the Naha District Court in 2018 ruled that the city “has no latitude to decide on rent” and it “should collect the full amount,” concluding the government’s act was unconstitutional.

The Fukuoka High Court’s Naha Branch in 2019 also ruled that the city violated the Constitution, but it did not specify the amount of rent that should be paid by the temple.

The city “has the latitude to decide how much,” the ruling said.

The decision led both the plaintiff and the city government to appeal to the Supreme Court.

The Grand Bench annulled the 2019 judgment and finalized the 2018 ruling.

Naha Mayor Mikiko Shiroma said the city government “will read the decision, discuss what needs to be improved, and respond.”

In light of the blending of state and religion in Japan before World War II, the postwar Constitution prohibits the state and local governments from being connected to a religion.

It was the third time the Supreme Court’s Grand Bench has declared a government action as unconstitutional in connection with religion.

The latest ruling was the first concerning Confucianism. The previous two decisions were related to Shinto shrines.