More asked to evacuate as Tochigi wildfire rages on

A wildfire continues to rage in a forest in Ashikaga, Tochigi Prefecture, on Feb. 25. (Kenji Notsu) 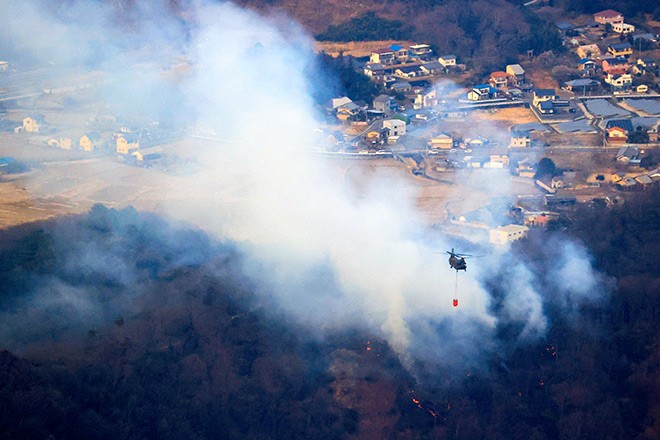 A wildfire burns a forest in Ashikaga, Tochigi Prefecture, on Feb. 25. (Kazuhiro Nagashima)

ASHIKAGA, Tochigi Prefecture--More than 200 households in the path of a raging wildfire on a mountainside here have been asked to evacuate as firefighters continued unsuccessfully battling the blaze.

“We have no clear idea when the fire will be brought under control with no rain forecast for the time being,” Ashikaga Mayor Satoshi Izumi said at a news conference on Feb. 25.

The fire broke out on the afternoon of Feb. 21 near Mount Ryogaisan in the city. It was still spreading on the evening of Feb. 25, burning about 100 hectares. That brought the number of households the city government has issued an evacuation advisory to 207.

Twelve helicopters of the Self-Defense Forces and the Tochigi prefectural government were dispatched to the area to drop water on the blaze from early in the morning on Feb. 25. A total of 168 people, including firefighters from neighboring Gunma Prefecture, also joined the efforts to put out the fire from the ground.

The Kita-Kanto Expressway’s section between Ashikaga interchange in Tochigi Prefecture and Ota-Kiryu interchange in Gunma Prefecture has been closed since the evening of Feb. 24 as the fire is approaching the area.

The Tochigi prefectural government on Feb. 25 decided to apply the Disaster Relief Law to the city.

In the path of a fire, an unmanned shrine on Mount Ryogaisan, a popular site among fans of an online game featuring personified characters of legendary swords, burned down.

It is believed that a famed blade that appears in the Token Ranbu game was forged on the mountain on the order of the lord of a castle that once stood on Mount Ryogaisan.