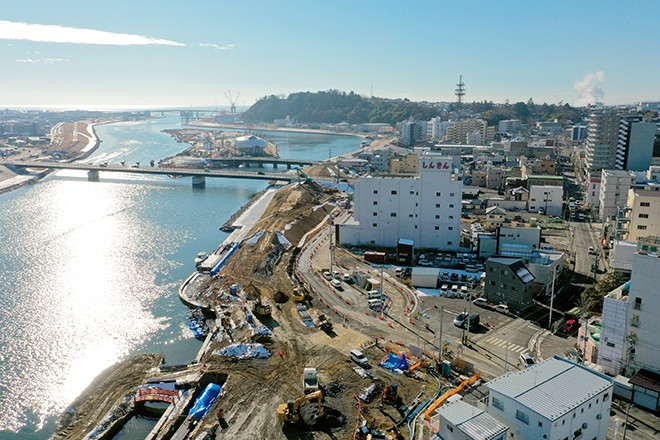 ISHINOMAKI, Miyagi Prefecture--This coastal city has been transformed, courtesy of a massive injection in government reconstruction spending following the 2011 earthquake and tsunami disaster that reduced it to ruins.

But the 1.9 trillion yen ($17.9 billion) pumped in to rebuild the northeastern city facing the Pacific did little to reverse the course of decades of social change that has afflicted numerous rural communities around Japan.

Ishinomaki was mauled more than any other municipality by the magnitude-9.0 Great East Japan Earthquake and tsunami that struck on March 11, 2011.

Close to 4,000 residents lost their lives. The figure represents about 20 percent of all fatalities around Japan from the disaster that also triggered a nuclear accident in Fukushima Prefecture. About 33,000 homes, or half the city's total, were either totally or partially destroyed.

Tsunami in excess of 10 meters swept into the city.

That is the reason the city is now protected by coastal embankments close to 10 meters in height that extend for about 56 kilometers along the coast, making it impossible to see the ocean unless viewed from higher ground.

Despite all the new social infrastructure, central Ishinomaki is pockmarked with vacant lots. In the area around JR Ishinomaki Station, about one-third of the buildings that used to stand before 3/11 have been replaced by empty plots or parking spaces.

All but one of the eight merchants’ organizations in the area have folded.

“Even before, it used to be quite lonely,” said the 59-year-old operator of a long-established outlet forced to close its doors a year ago. “But there were even fewer customers after the disaster and we simply could not carry on.”

At one point, Ishinomaki government officials sought to make their rebuilt city a showcase for the entire world, but were soon faced with the dire need to provide housing for thousands of residents.

“In the limited reconstruction period that we had, we did not have the luxury of figuring out ways to revitalize the city,” said a section head in the city government. “We had our hands full just trying to overcome the awful situation we faced due to the disaster.”

Ten years ago, Masatoshi Hoshi, now 66, was put in charge of an eight-member team at the Ishinomaki city government tasked with putting together the city’s reconstruction plan.

Hoshi felt it was a golden opportunity to resolve a host of problems facing rural communities, such as a declining population and a hollowing out of the city center.

Ishinomaki is the second largest city in Miyagi Prefecture behind the prefectural capital of Sendai. It flourished as a key shipping center linking the Tohoku region with what is now Tokyo during the Edo Period (1603-1867).

“We wanted to create a city that was an advanced model, but all we ended up doing was dream big dreams,” said Hoshi, now a member of the Ishinomaki city assembly.

With local residents moving in droves to Sendai and elsewhere, city government officials did not have the luxury to envisage a “city of the future.”

Around that time, there was a sense of crisis that the outflow of residents might push Ishinomaki to the brink of extinction, a former city government official recalled.

With the city in ruins, some residents converged on the mayor’s office to demand that new homes be built as soon as possible.

Hoshi recalled a visit to Ishinomaki in 2012 by a Finance Ministry bureaucrat who asked him how much money was needed for reconstruction.

Before the disaster, the city government's annual budget was about 60 billion yen, but Hoshi said he thought as much as 500 billion yen would be required.

“You will not be able to carry out all the projects that would be financed with such a large budget,” the Finance Ministry official said.

In the 10 years since the disaster, however, the total amount spent on the rebuilding and reconstruction of Ishinomaki came to 1.2 trillion yen.

The massive reconstruction projects involved moving entire neighborhoods to the suburbs. The new residential areas did stem the pace of residents leaving the city but not the overall decline in population.

With so many new communities in the suburbs, the city center resembled a ghost town of shuttered businesses.

But more problems are in store for Ishinomaki.

The city will have to pay for the maintenance and upkeep of the various infrastructure paid for by the central government with a smaller budget in the future.

But Ishinomaki's situation is anything but unique.

For example, the Machikata district of Otsuchi in Iwate Prefecture had a pre-disaster population of about 4,500, which accounted for 30 percent of the town population.

But the tsunami and subsequent fires triggered by the earthquake killed 659 residents.

Yutaka Ikarigawa, the mayor at the time, envisaged concentrating the district into an area half of its previous size and redesigning the community into a checkerboard pattern.

Spending about 15.6 billion yen, 771 plots of land were completed in less than five years. Normally a project of that size would have taken two decades.

But as of 2020 only about 60 percent of the plots had been occupied. Some residents could not wait for the project’s completion and moved elsewhere.

Ikarigawa, 69, was defeated when he ran for re-election against a candidate who promised an even faster pace of reconstruction.

“Even if the infrastructure was constructed according to schedule, residents will not return unless we complete the work in the time they have given themselves to wait,” said Ikarigawa.

In 2020, the infrastructure ministry established a panel of experts to assess the reconstruction process after a natural disaster. One proposal that emerged from the lessons of the past decade is to consider thinking about reconstruction even before a disaster strikes.

That emerged from panel members who felt that if communities already losing population are hit by disasters in the future, there would be almost no chance for reconstruction.

It's an ominous prospect for areas the central government deems vulnerable to a Nankai Trough earthquake that experts warn will likely strike within 30 years.

According to one estimate, such a quake would claim as many as 230,000 victims. This compares with the more than 22,000 people who perished or remain unaccounted for after the Great East Japan Earthquake and the tsunami it generated. The Nankai Trough, an oceanic trench in the Pacific, stretches off the coast of Shizuoka Prefecture to Kyushu over about 700 kilometers.

The town of Minami in Tokushima Prefecture on the island of Shikoku faces the Pacific Ocean and has been warned it could face tsunami as high as 24 meters if the Nankai Trough quake hits.

Concerned about the town’s future, residents have already begun preparing for reconstruction. They searched for areas on higher ground where homes now built near the harbor could be relocated to. They also calculated the expected cost.

Priority was placed on “forming a consensus about the future.”

If residents have a road map for the future, money and time will not be wasted when the need for reconstruction arises, so the thinking goes. That, town officials believe, would guarantee the continued existence of the community.

(This article was compiled from reports by Susumu Okamoto, Eiji Shimura, Masakazu Higashino, a senior staff writer, and Masataka Yamaura.)