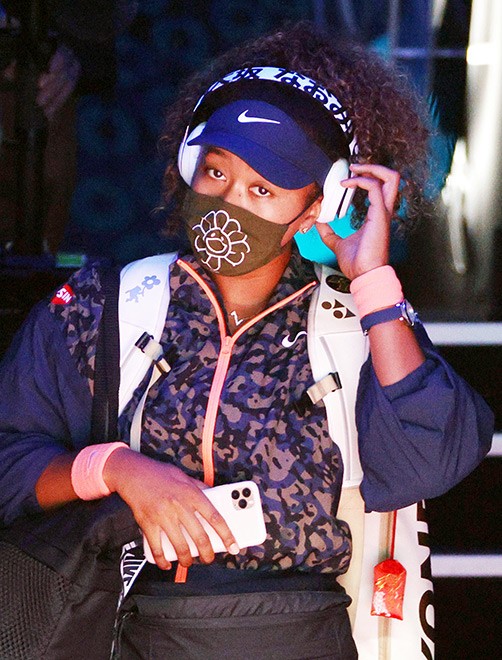 Naomi Osaka carries a racket bag with a red shrine lucky charm attached to it at her quarterfinal match of the Australian Open championship on Feb. 16. (Reuters)

IWAKUNI, Yamaguchi Prefecture--Tennis fans hope that a lucky charm carried by Naomi Osaka during her championship run in the Australian Open can also help them lift their games to the heavens.

The amulet appears to be the “hissho” (go for victory) lucky charm from Shirasaki Hachimangu shrine in Iwakuni, Yamaguchi Prefecture, based on its color and design.

During the tournament, Osaka, 23, was seen carrying a racket bag with an amulet attached to it believed to be from Shirasaki Hachimangu.

The shrine has been flooded with orders for the lucky charm since around Feb. 22, two days after Osaka won the Australian Open, her fourth Grand Slam title. Some 4,000 hissho lucky charms were sold online, while roughly 800 were purchased on the grounds of the shrine.

“I’m surprised that the charm has created such a buzz,” said Hiroshi Yamatsuka, 57, a Shinto priest at the shrine. “The charm may have helped Osaka win the championship.”

Even after the charm was sold out, the shrine is still receiving phone calls from those wanting to reserve one for when they are back in stock, according to a shrine official.

The hissho lucky charm bears the shrine’s crest, three horizontal lines drawn inside a circle, and is stitched with embroidery of a white tiger roaring as lightning strikes.

“I don't think you can find anything like this in the country,” Yamatsuka said.

Many deities are enshrined in Shirasaki Hachimangu. The Genji clan is said to have worshipped the deities as a god of victory in war.

It remains unknown how and where Osaka obtained the lucky charm.