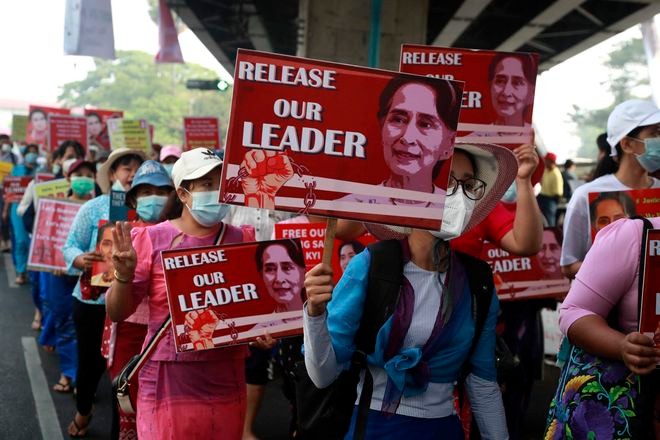 Myanmar police released a Japanese freelance journalist on Friday after briefly detaining him during a protest in the commercial capital of Yangon, Radio Free Asia showed in a livestream on Facebook.

The arrest of Yuki Kitazumi, who runs a media production company in the city and used to be a journalist with the Nikkei business daily, was the first detention of a foreign reporter since the Feb. 1 military coup.

"Thanks very much to all my friends. I'm OK. I'm safe," said Kitazumi after leaving the police station in the city's Sanchaung district.

Earlier, Japan said one of its nationals in his 40s had been detained by Myanmar security police in Yangon, without giving details.

Police in Myanmar did not immediately return calls to seek comment.

Myanmar has been roiled by protests for weeks since the army seized power from elected leader Aung San Suu Kyi and detained her and most of her government.

Kitazumi briefly became the second foreigner known to have been detained since the coup, after Australian academic Sean Turnell, an adviser to Suu Kyi on economic reforms, was arrested on Feb. 6. Turnell remains under arrest.

In 2007, another Japanese journalist covering protests in Myanmar, Kenji Nagai, was shot dead at point-blank range, when the army fired on protesters during Saffron Revolution protests led by Buddhist monks.

Kitazumi's company produces video content, from news to movie trailers, and trains journalists with emphasis on free speech, his company says on its website.

"When I listen to the young people taking part in the demonstrations, they say 'Yes, I'm scared, but if we don't raise our voices to say that we're scared, we'll have to live in fear our entire lives,'" Kitazumi said in a recent post on Facebook.

Kitazumi is a member of the Kaigai Kakibito Club of Japanese journalists and interpreters working overseas.

In July, the club's blog carried an interview with Kitazumi in which he said he had also directed a short comedy film titled, "One bowl of Mohinga," a traditional breakfast dish in Myanmar.

Kitazumi has also had parts in movies in Myanmar, the blog said, posting a picture of him acting.

He told the blog he moved to Myanmar to cover the 2015 general elections, the country's first free polls in decades, won by Suu Kyi's National League for Democracy party in a landslide.

Kitazumi left the Nikkei in 2012 after having worked as a reporter from 2001, a representative of the paper said.

"They're fighting today so that this kind of thing won't happen again, so they can live a future of peace."