Olympics will be held with fans in stands, says Hashimoto 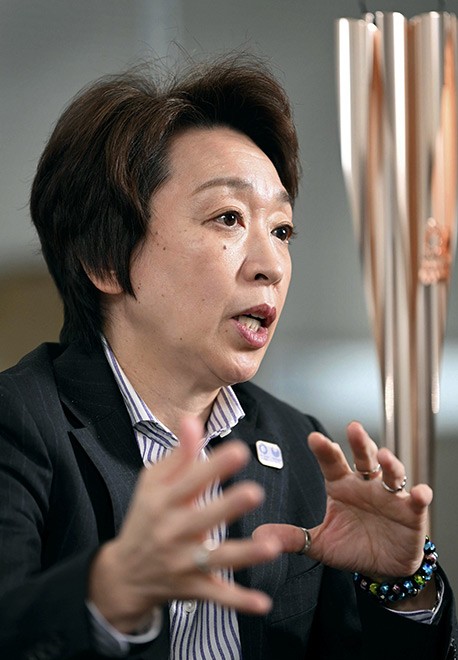 Seiko Hashimoto, the newly named head of the Tokyo Olympic organizing committee, responds to questions in a Feb. 26 interview. (Pool)

Seiko Hashimoto, dismissing fears about the COVID-19 pandemic, said the delayed Tokyo Olympics would go ahead as planned in July, adding that she did not contemplate the events being held without spectators in the stands.

Hashimoto, a former Cabinet member who has participated in both the Winter and Summer Olympics, agreed to an interview with several media organizations on Feb. 26, about a week after she was formally named the new head of the Tokyo Olympic organizing committee. She replaced Yoshiro Mori, a former prime minister whose sexist remarks triggered international criticism that led to his resignation.

“When we think about the possibility of holding the Olympics without fans in the stands, athletes will definitely wonder why there are no fans just for the Olympics and Paralympics when other competitions are allowing in spectators,” Hashimoto, 56, said.

In the absence of a scenario to hold the Olympics without fans in the stands, she said the ultimate decision would depend on whether COVID-19 cases can be brought under control.

She noted that the International Olympic Committee decided in July 2020 to postpone the Olympics to this year because of the global health crisis that was already raging and emphasized that pushing back the start once again was unlikely to gain public support, given the additional spending that would be required.

“Delaying the Olympics by a year has led to heavy expenditures, which naturally led to criticism,” Hashimoto said. “A tremendous amount of energy would be required to make the decision to delay it once again. Such a move would never gain the support of the Japanese public.”

She added that neither the IOC nor the International Paralympic Committee had said anything about another postponement.

Referring to public opinion surveys that found large numbers of respondents in favor of either cancelling the Tokyo Olympics altogether or delaying the sports extravaganza once again, Hashimoto said, “Support for holding the Olympics will not increase until we can eliminate various issues of concern concerning the novel coronavirus pandemic, including the serious strain being placed on the medical care structure.”

Hashimoto said the issue of spectators attending the Tokyo Olympics would be discussed in the coming week at a meeting of officials from the organizing committee and the IOC as well as the Tokyo metropolitan and central governments.

“Everyone wants an early decision about the direction to be taken regarding fans to prepare tickets and hotel accommodations,” Hashimoto said.