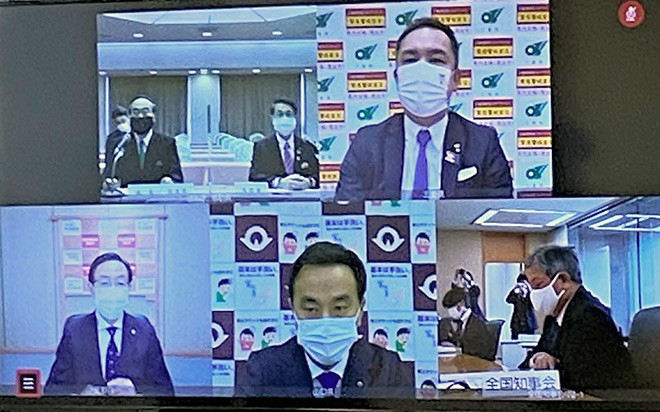 An online meeting of prefectural governors to discuss a response to the pandemic on Feb. 27 (Nami Hamada)

Prefectural governors across Japan are calling on the central government to implement stringent measures to prevent a COVID-19 resurgence after a state of emergency for Osaka, Kyoto and four other prefectures is lifted one week early from March.

They are also seeking economic assistance for prefectures not covered by the emergency declaration, citing local industries battered by the public health crisis.

They plan to compile the requests into a report to submit to the central government.

At a Feb. 27 online meeting on their response to the COVID-19 scare, members of the National Governors’ Association agreed that “optimism is not allowed” over the future course of the pandemic as the Tokyo metropolitan area, the country’s main hot spot, remains under a state of emergency.

The governors urged the government to caution the public to remain vigilant against the virus based on lessons learned through the third wave of novel coronavirus infections since autumn and enforce strict anti-virus measures even after the emergency is lifted for the six prefectures from March 1.

Aside from Osaka and Kyoto, the other prefectures are Hyogo, Aichi, Gifu and Fukuoka.

Tokyo and the adjacent prefectures of Kanagawa, Saitama and Chiba will continue to be covered by the emergency at least until March 7.

The governors also called on the government to expand eligibility for relief assistance and provide economic aid to prefectures not placed under the emergency to help sustain local industries and secure employment.

The prefectures not covered by the emergency and businesses that were not asked to close early in return for relief payouts are also experiencing “serious economic consequences due to the pandemic,” they said.

Hokkaido Governor Naomichi Suzuki noted there was a “discrepancy” in the situation regarding businesses in prefectures covered by the emergency and those that were not.

Shimane Governor Tatsuya Maruyama said the food service industry in his prefecture is in a “dire situation,” with no economic assistance provided by the central government.

Restaurants in prefectures under the emergency umbrella receive relief money from the central government.

The governors also called on the government to promptly provide more details about plans to vaccinate the entire population. Specifically, they wanted to know the schedule for shipments to local governments and the amount of doses to be supplied.

Fukushima Governor Masao Uchibori made a special request, asking that 10,000 or so workers performing decontamination operations in the prefecture’s Futaba county be inoculated there if they wish.

People are basically supposed to get vaccinated in the area where their residence is officially registered.

Most of them come from outside the prefecture. They are engaged in cleanup efforts around the stricken Fukushima No. 1 nuclear power plant, which went into a triple meltdown following the 2011 earthquake and tsunami disaster.

The online meeting was attended by 40 governors and vice governors.