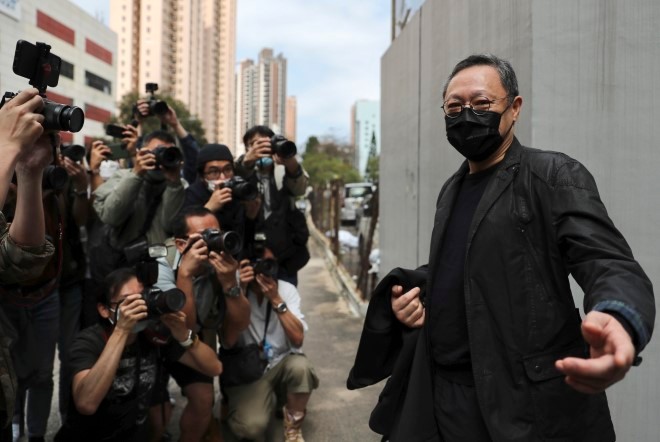 Former law professor Benny Tai, right, a key figure in Hong Kong’s 2014 Occupy Central protests and also was one of the main organizers of the primaries, who was arrested under Hong Kong’s national security law poses for photographers before walking in a police station in Hong Kong on Feb. 28. (AP Photo)

HONG KONG--About 1,000 people gathered outside a Hong Kong court on Monday ahead of the hearing for 47 democracy activists charged with conspiracy to commit subversion, as authorities intensify a crackdown under the city’s national security law.

The activists are accused of organizing and participating in an unofficial primary poll last July aimed at selecting the strongest candidates for a legislative council election that the government later postponed, citing the coronavirus.

Authorities said the informal poll was part of a plan to “overthrow” the government, further raising alarm that Hong Kong has taken a swift authoritarian turn.

“This is the most ridiculous arrest in the history of Hong Kong,” said Herbert Chow, 57, who was queuing outside the court and wearing a black face mask. “But I have confidence in our judicial system to restore justice. It’s the last line of defense.”

The activists--39 men and eight women, ages 23-64--were charged on Sunday under the national security law, which punishes what China broadly defines as secession, subversion, terrorism and collusion with foreign forces with up to life in prison.

Security was tight, with more than 100 police officers deployed as supporters gathered outside the West Kowloon court in one of the largest rallies since the coronavirus outbreak.

The queue to enter the court stretched several hundred meters, nearly reaching around the entire block.

Some chanted: “Liberate Hong Kong, revolution of our times” and “Fight for freedom, stand with Hong Kong,” popular slogans during anti-government protests that roiled the city in 2019.

Others raised the three-finger salute that has become the symbol of protest against authoritarian rule in Myanmar.

Jonathan Williams, a British diplomat at the U.K. consulate in the city, said: “It’s clear that the use of the national security law is going much broader than the Chinese and Hong Kong authorities promised.”

He added, however, that the UK government had “full faith in the independent judiciary,” to deal with the defendants fairly and impartially without political pressure.

As crowds swelled outside the court building, some held up large yellow banners that said: “Release all political prisoners now.”

Authorities have said that campaigning to win a majority in Hong Kong’s 70-seat Legislative Council, with the purpose of blocking government proposals to ramp up pressure for democratic reforms, could be seen as subversive.

Among those charged were the organizer of the primary election and former law professor Benny Tai, as well as prominent activists Lester Shum, Joshua Wong and Owen Chow.

The charges are the latest blow to the city’s pro-democracy movement. Since the security legislation was imposed on the city last June, some elected legislators have been disqualified, scores of activists arrested and others have fled overseas.

The crackdown on dissent comes as Chinese officials prepare to unveil electoral reforms that will most likely further diminish the role and influence of opposition forces in public office.

As Beijing consolidates its hold over Hong Kong, concern is mounting in the West over freedoms promised to the former British colony when it returned to Chinese rule in 1997 and which underpin its role as a global financial center.

U.S. Secretary of State Antony Blinken called for the 47 to be released immediately.

“Political participation and freedom of expression should not be crimes,” Blinken said on Twitter. “The U.S. stands with the people of Hong Kong.”