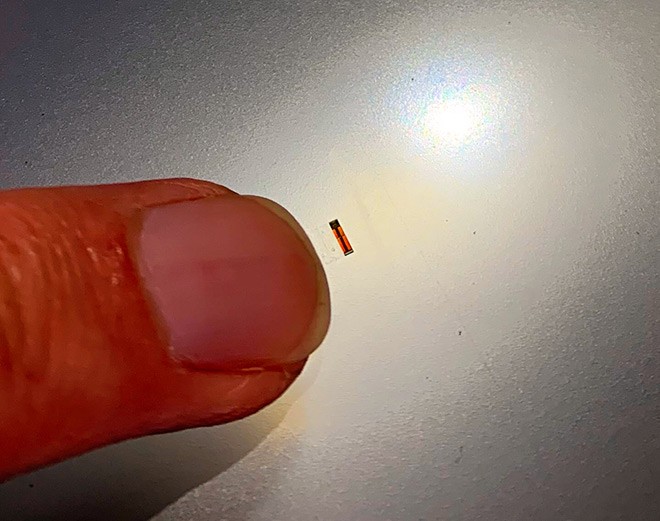 SUITA, Osaka Prefecture—Inspired by an Osamu Tezuka-created anime TV series from his childhood, Noriyuki Miura is developing a “powder” computer so tiny that people can swallow it to check on their health.

Miura, now a professor of integrated circuitry at Osaka University’s Graduate School of Information Science and Technology in Suita, Osaka Prefecture, said he was mesmerized by “Wonder Beat Scramble,” a TV animation program broadcast in the 1980s.

A hero of the program is minimized so that he can enter the human body and treat diseases.

Miura does not intend to shrink in size to enter people’s bodies, but he plans to create a computer as small as 0.1 millimeter, about three times the size of a cedar pollen.

A semiconductor usually contains a collection of a central processing unit, memory and censor. For Miura’s powder computer, these functions will be separated and minimized.

It will be so small that it can be inserted through the mouth to check the condition of the person’s stomach and intestines. It could also be attached to children and elderly people to watch out for their safety, according to Miura.

“If it is so small that people do not easily notice its existence, it can be used without creating a psychological burden,” he said.

Semiconductors have increased in performance through increased scale of integration.

Gordon Moore, co-founder of Intel Corp., has projected the scale of integration will double every 18 months under the so-called Moore’s Law and has called for minimization and reduced costs.

Miura has studied three-dimension integrated circuits for about 10 years since around the time he entered university.

His focus was on increasing performance by stacking chips, but he said he later realized that he had not “paid attention to how to use such high-performance computers.”

Miura believes the distance between real space where humans live and cyberspace will further be shortened, and computers will eventually take over more functions and decision-making processes of humans.

Miura said he came up with the idea of dismantling the integrated semiconductor and making it into a powder state while he was thinking about what types of technology will be most useful in future society.

“I want to develop a computer that can blend into society without humans noticing it and feeling burdened by it,” he said.