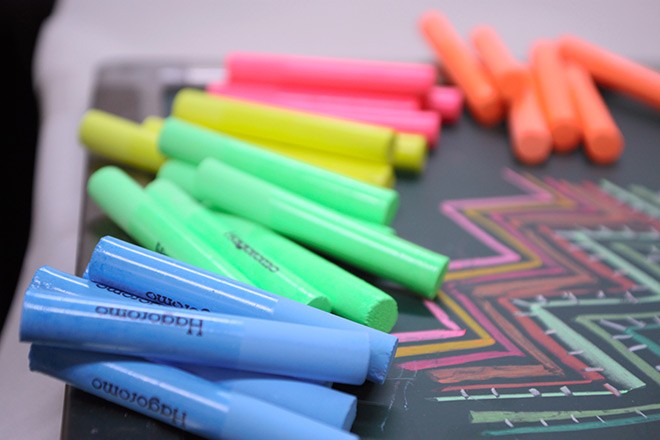 When prep school teacher Shin Hyeong-Seok came to Japan some 15 years ago and discovered the holy grail of chalk, he fell so deeply in love that he became an importer.

Now, he manufactures the top-shelf product coveted by anyone with a blackboard, saving it after the original Japanese maker, Hagoromo Stationery, went out of business.

Shin, 50, is not the only one fascinated by how Hagoromo chalk writes. It has earned a cult following among users, including distinguished researchers.

One testament to the chalk’s global popularity is a YouTube video that has received 20 million views since it was uploaded two years ago.

In the video, prominent mathematicians at Stanford University and Columbia University scribble mathematical formulas with Hagoromo chalk onto blackboards, lavishing praise on the product.

One called it the “Rolls Royce of chalk,” while another said it was “one of the best-kept secrets in the math world.”

The chalk they use now is made by Sejongmall Co., based in Pocheon, South Korea, which is run by Shin.

“Writing with it feels as smooth as butter,” Shin said, adding that it is hard and produces little powder.

Sales remain robust, even as many schools have moved to online classes since the onset of the pandemic, according to Shin.

Fans said letters written with the chalk can be seen clearly on the board, even in video lectures.

The original method of making Full Touch was established by Hagoromo Stationery, a company that was based in Kasugai, Aichi Prefecture. It had a roughly 80-year history before it shuttered in 2015.

The company made 87 million pieces of chalk in 1990, among the largest in the industry.

The first chalk used in Japan was imported from France during the Meiji Era (1868-1912), according to Nihon Hakuboku Kogyo Kumiai, an industry association. Then dozens of makers began producing chalk in Japan in the Taisho Era (1912-1926).

The chalk industry hit a peak after the end of World War II, with the product widely used in schools and other facilities across the country.

The association’s records show the domestic output of chalk totaled 140 million pieces in 2008, the most recent year for which figures were available.

Demand for chalk has faded since schools teach fewer children due to the declining birthrate and some classes have moved online. The industry association estimates output today to be about 80 to 90 percent of the amount in 2008.

Hagoromo Stationery went out of business six years ago. Takayasu Watanabe, the third-generation president of the company, decided to close down the family business, as he was suffering from a rare, intractable disease.

“That the chalk industry was declining is one reason,” his daughter, Takako Iwata, 44, said of the closure. “Adding to that, my father could barely work due to the disease and we could not find anybody willing to take over his business.”

THE WRITE MAN FOR THE JOB

Shin stepped forward to revive production of the Hagoromo chalk in South Korea after he learned about the company’s closure.

He put his passion for the product on full display and managed to talk Watanabe into letting him produce Hagoromo chalk.

“The world’s best chalk should be the last to disappear from the market,” he said.

By that time, Shin had imported Hagoromo chalk from Japan to sell in South Korea.

Shin first encountered Haoromo chalk about 15 years ago when he visited a Tokyo cram school. He remembers being fascinated by how it felt writing with it.

“This is a totally new world,” he recalled thinking.

The chalk was also popular with his South Korean students.
Shin thought about importing the chalk so that it could become widely used in his country.

Despite having little business experience, he made an appointment to see Watanabe to propose importing the product.

Watanabe gave the nod to the proposal partly because Iwata, who had lived in South Korea for her studies, had pushed for it. Ever since their first meeting, Watanabe has treated Shin like a family member.

His decision to provide Shin with the method to make Hagoromo chalk did not come without criticism or concern as it amounted to technology transfer to a foreign country, according to Iwata.

“Still, my father did not want to see his chalk disappear,” she said. “He left the chalk’s fate in the hands of Shin, as he was so passionate about keeping the chalk alive.”

Iwata hopes the chalk to which her father devoted his whole life will continue to be loved by users.

Hagoromo chalk production started in South Korea in 2016, with the necessary materials imported from Japan.

Workers make the dough for the chalk from about five kinds of materials, including calcium carbonate, based on the method established by Watanabe. Among the machines used to produce the chalk was a noodle-making machine Watanabe had modified. All the machines were shipped from Japan.

“The materials, their suppliers and the machines remain the same as Hagoromo Stationery’s,” Shin said. “The only difference that I can think of is water. We use water in South Korea to mix the materials."

Some of the 20 or so employees who worked for Hagoromo Stationery traveled to South Korea to work as technical advisors to ensure that workers there could accurately reproduce Watanabe’s method.

“We want to maintain and preserve Watanabe’s machines,” said Yoshiharu Yamamoto, 53, who works at Sejongmall’s factory. “I get the sense that Hagoromo chalk is becoming popular in South Korea. I hope that it will throughout the world, too.”

The two promised to visit Shin’s factory in South Korea when it gets warmer.

But Watanabe died in July at 76 without being able to fulfill the promise due, in part, to travel restrictions brought about because of the coronavirus pandemic.

“Until the very end, Watanabe cared about the machine’s condition and my business,” Shin said. “I am determined to follow his deep commitment to quality and to his customers.”