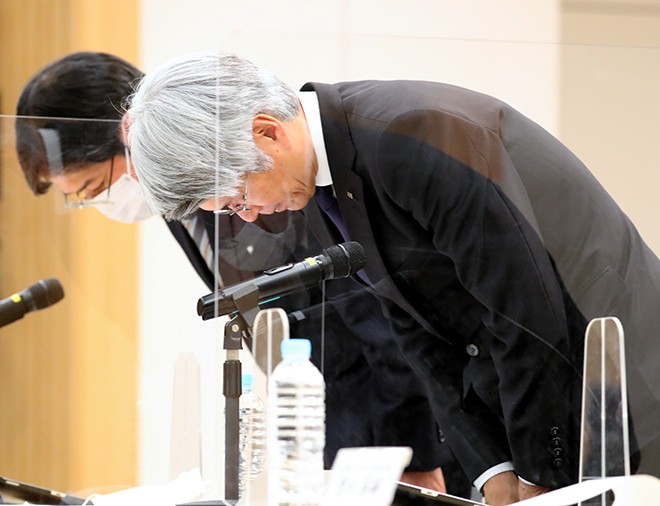 Mizuho Bank, one of Japan’s three megabanks, was struggling to clean up the mess of its latest ATM fiasco while trying desperately to quell the anger of its customers.

At a news conference March 1, Mizuho Bank President Koji Fujiwara apologized for the trouble caused by the system failure that started on Feb. 28.

The glitch caused up to 4,318 of the bank’s automated teller machines, or 80 percent of the total, to malfunction. Customers were unable to withdraw money from the ATMs, and the machines “ate” 5,244 bank cards or books.

According to Mizuho Bank, operations were recovered at all of its ATMs by 3 p.m. on March 1.

However, the bank had not finished returning the swallowed cards and books to their rightful holders as of the night on that day.

A man in his 70s expressed outrage over the trouble on March 1, when he visited a Mizuho Bank outlet in Tokyo because as he could not use an ATM the day earlier.

“Mizuho Bank lacks a sense of concern,” he said. “It pledges to prevent a recurrence after each extensive system failure. But new problems arise several years after the top executive is replaced.”

The bank said it will return extra fees charged to customers who had to withdraw cash from the ATMs of other banks after the trouble with Mizuho machines.

The bank had also experienced widespread system failures in 2002 and 2011.

It plans to appoint third-party investigators to identify the cause of the latest problem and propose steps to prevent a recurrence.

The Financial Services Agency on March 2 was expected to order the bank to submit a detailed report on the trouble and what countermeasures it plans to take.

The agency is also expected to look into factors that led to the malfunctions as well as the bank’s management system.

The system failed when the bank was transferring data on fixed-term deposits for 700,000 accounts on Feb. 28. The previous day, the bank processed such data for 600,000 accounts.

The data transfers apparently overloaded the system and affected the operations of the ATMs.

“We underestimated the burden on the system,” Fujiwara said at the news conference.

The bank has also come under fire for dragging its feet in notifying customers of the ATM problems.

The bank announced the system failure on its website past 1 p.m., two hours after it first detected the problem.

By then, users, unaware of the trouble, were continuing to lose their bank cards and bank books in the ATMs.

The bank increased the number of workers at its call center at 2 p.m. Thirty minutes later, bank employees were told to show up at the office to help respond to the emergency.

The bank did not hold a news conference on Feb. 28.

It also failed to promptly grasp the extent of the problem.

ATMs are supposed to not return bank cards or books if the transactions are not completed successfully. If the items are not returned, customers are instructed to contact the call center so that a guard with a security company can rush to the ATM and deal with the problem.

But customers had to wait for hours for help in the latest failure because so many ATMs stopped functioning simultaneously.

“We could have had more options to respond if we had detected the problem sooner,” Fujiwara said.

Mizuho Bank became one of the nation’s largest commercial banks through the merger of three banks in 1999.

Its first major system failure occurred on the opening day of reorganized banking operations in April 2002, affecting around 2.5 million transactions. Three top executives stepped down as a result.

In 2011, the bank’s system failed again after large numbers of people used the ATMs to send money to help victims of the Great East Japan Earthquake, tsunami and the nuclear disaster. The volume overburdened the system.

The president of the bank resigned to take responsibility for the fiasco.

In both incidents, the agency ordered the bank to improve business operations.

Since then, Mizuho Bank has worked to build a safe and secure system.

By summer 2019, the bank had revamped its core banking system after spending more than 400 billion yen ($3.74 billion).

Asked about whether the vendor of the system was responsible for the latest glitch, Fujiwara said the bank will take all the blame because it is the one that deals with customers.

(This article was compiled from reports by Shinji Hakotani, Shuhei Shibata, Yuji Yamashita and Junki Watanabe.)