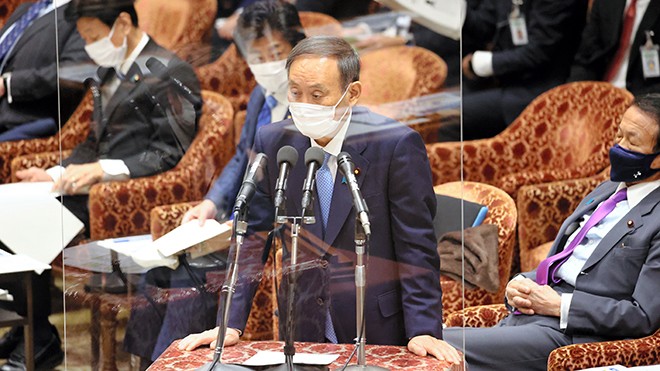 Prime Minister Yoshihide Suga showed more caution about lifting the COVID-19 state of emergency for the greater Tokyo area after opposition lawmakers and governors warned about a possible rebound in virus infections.

“I would like to wait and see how the infectious disease situation goes until last minute,” Suga said at the Lower House Budget Committee on March 2 about the state of emergency.

The state of emergency is scheduled to end on March 7 for Tokyo and the three surrounding prefectures of Chiba, Kanagawa and Saitama. It was lifted for six other prefectures on Feb. 28.

Suga on March 1 appeared eager to remove the final prefectures from the state of emergency.

He reiterated the achievements of the anti-virus measures taken so far.

“We put a heavy burden on people by declaring the state of emergency, but the number of new infection cases dropped by more than 80 percent,” he said at the Lower House Budget Committee. “We achieved tangible results.”

He added, “We will continue to fully implement anti-virus measures, such as shortening business hours of restaurants and bars, to lift the state of emergency across the nation as scheduled on March 7.”

However, opposition party lawmakers urged Suga to exercise caution because health experts have warned that the virus could start spreading widely again. The number of new COVID-19 cases in Tokyo has dropped, but the rate of decline has shown signs of leveling off.

“We should lift the state of emergency bit by bit to prevent a rebound from happening,” Yukio Edano, leader of the main opposition Constitutional Democratic Party of Japan (CDP), said.

Some of the cautious experts are on the central government’s advisory panel that was set up to deal with the health crisis.

Kazunori Yamanoi, a CDP lawmaker, called on Suga to listen to these experts.

“I would like you to answer that you will respect the opinions of the advisory board when you make a decision on whether to lift the state of emergency,” he said.

Suga responded by again mentioning the results of the anti-virus measures taken in the capital area.

“Tokyo and the three other prefectures have cleared almost all the criteria to lift the state of emergency,” Suga said. “I will make the final decision.”

Suga has come under heavy criticism for his response to the novel coronavirus pandemic. He drew confusion by urging the public to take measures to prevent the spread of the virus while promoting domestic tourism through the Go To Travel subsidy campaign. The Go To projects, which were intended to help local businesses and economies hit hard by the pandemic, were eventually suspended.

Suga was also criticized as being too late in closing the border to international travelers.

The opposition leader asked Suga to strengthen restrictions on entry into Japan to prevent other variant strains of the virus from flowing into the country, noting that the British variant has already spread here.

Edano proposed that people entering Japan should be isolated at hotels near airports for about 10 days and be required to take multiple polymerase chain reaction (PCR) tests.

Suga responded: “We are now asking people coming to Japan from countries where variant strains are spreading to isolate themselves (at facilities prepared by quarantine offices) for three days from their arrival. We also ask them to undergo additional tests on the third day.”

“There are limitations in terms of necessary personnel and material resources, such as quarantine officers and accommodation facilities,” Suga said.

Chiba Governor Kensaku Morita and Saitama Governor Motohiro Ono both said on March 1 that any decision on the state of emergency must be made carefully.

In Chiba Prefecture, 128 new COVID-19 cases were confirmed on March 1, exceeding the figure of 121 for Tokyo.

“If Chiba continues to mark more than 100 new daily cases, it will be difficult to lift the state of emergency on March 7,” Morita said at a news conference.

Saitama Prefecture confirmed 97 new infections on Feb. 28, an increase from the tally a week earlier.

“I am not convinced yet that the state of emergency can be lifted in Saitama Prefecture, and I want to make the judgment carefully,” Ono said.

He also noted that the decline in infections for his prefecture is also leveling off.

“The number of new infection cases is bottoming out or dropping at a slower speed,” Ono said.