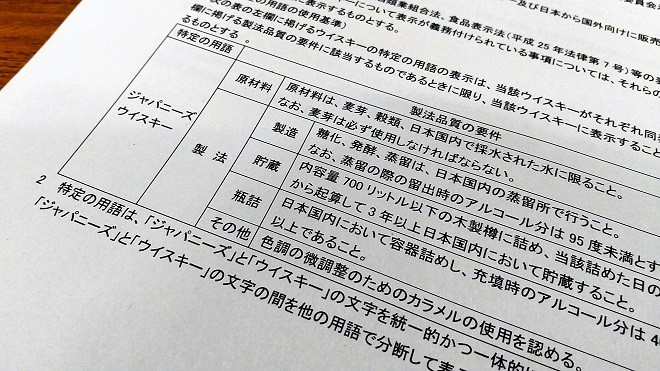 A document on the guidelines for Japanese whiskey compiled by the Japan Spirits and Liqueurs Makers Association. There is no penalty for makers who refuse to follow them. (Satoshi Daiguji)

The endless debate over what can be called an authentic Japanese whiskey that has had lovers of the sought-after thirst quencher long arguing has finally been settled.

Eliminating any blurriness around what constitutes "Japanese whiskey," new labeling standards state it must not contain any imported spirits and that its distillation and other productions processes must be done in Japan.

The Japan Spirits and Liqueurs Makers Association unveiled the new standards for whiskey makers on Feb. 16.

While they ban mixing imported spirits into whiskey made in Japan, the self-imposed guidelines also state that imported malt grains can be used as a raw ingredient.

"We want to clarify the definition and make it clear to customers at home and abroad so they avoid confusion, and we also want to continue to promote the value of whiskey, which has uniquely evolved in Japan," an association official said.

In recent years, cases have come to light where products were labeled "Japanese whiskey" and exported to foreign markets even though they were distilled outside Japan and imported to the country for bottling.

With criticism pouring in from outside Japan over the lack of rules for labeling, the association had been working to come up with a new set of guidelines to officially define what Japanese whiskey is.

Under the new rules, which, however, carry no penalty for those who fail to follow them, to be considered Japanese whiskey, conditions including the following must be met:

Raw ingredients used in the spirit must be limited to malt and other cereals, as well as water obtained in Japan.

Saccharification, fermentation, distillation and other production processes must be carried out in Japan and bottling must take place after the product is aged for at least three years in wooden barrels in the country.

The association also requires manufacturers to stick to the guidelines if they want to label their products using terminology that is similar to "Japanese whiskey," such as "Nihon (Japan) whiskey" and "Japan whiskey."

Producers who don't want such identifying terms on their labels are, of course, free to use imported spirits for their products, according to the association.

The association is calling on its 82 member companies and other domestic businesses to follow the regulations. It will also send an English edition of the rules to industry organizations outside Japan to notify them of the rules.